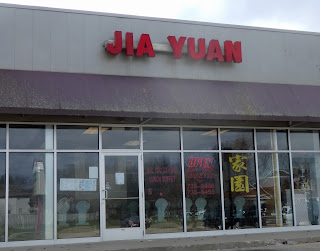 We read about this place and decided to stop in for lunch, and it was so worth it. We were late for lunch so had the place to ourselves. When we walked in we seemed to surprise the woman at the counter. But she gave us our paper menus and we took a seat to decide what we wanted to order. 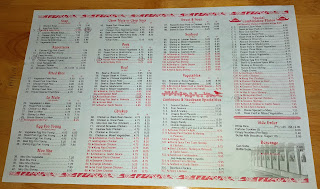 It wouldn't be the Hunan Tirple Delight :-) 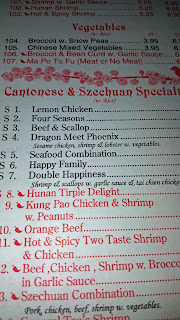 We always check out the hot and sour soup in any new to us restaurant and our server/proprietor dished it out from the lunch buffet counter. 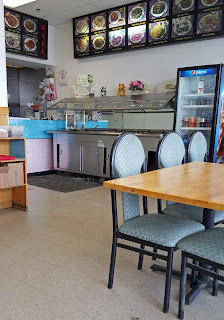 It was hotter than most but quite good and a close second behind our always favorite from Wei Wei Palace. 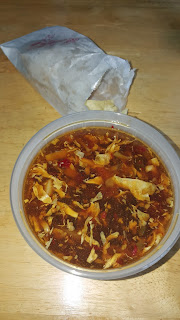 Most dishes here are served in take-out containers which is convenient for all but were heavy on styrofoam, which is not good. Customers pick up their utensils, napkins, etc. from a central shelf that also contained kids' entertainment tools, which was cool. There were pitchers of water in the cooler from which we replenished our waters. It was a little like being in their living room and we liked the atmosphere, complete with kids' drawings lining the walls. 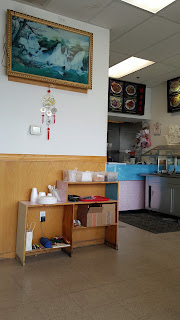 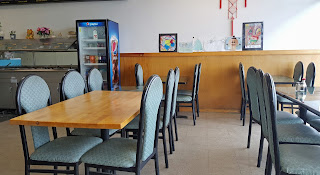 This looks to be a two person, man and wife operation, and other than immediately bringing our soup, cooked everything else to order. English was understood but everything was written down in Chinese. And back to our initial ordering, when we stepped back up to the counter and placed our very large order, she wanted to take the menus back from us but we kept them to use as placements and reference. Hope that was ok :-)

After the soup & wontons, the Szechuan Beef and Hunan Pork Vegetables arrived.

Vegetables were crisp, pork was a little tough, but all in all, very respectable dishes. We liked the plenitude of vegetables and the plates not filled up with rice.

Under the Special Combination Plates we selected Jia Yuan Special Chicken. It came neatly in its own styrofoam container :-(  with what we think might have been the best egg roll we ever tasted. It wasn't stuffed with no-name, no-taste fillers and was actually enjoyable with flavor, as was the chicken (General Tso style but not as sweet, and spicier). 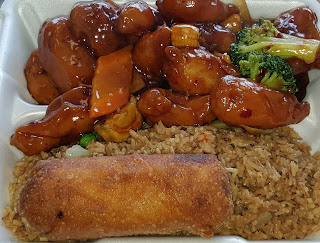 The last dishes to arrive were Singapore Mei Fun Lo Mein and our dumplings. Usually the dumplings would have arrived earlier but these were obviously made with care and had an extraordinary, thicker, wonderfully textured shell. We requested pan fried and they accommodated us with these lovely items. 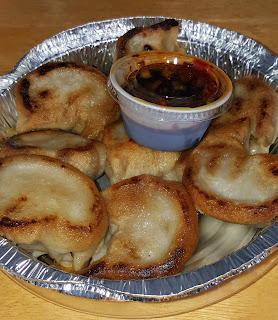 The Lo Mein dish looked appealing, the noodles were great, but there was an overwhelming spice in this dish we could not identify but did not care for (maybe Madras curry?). We're generally fans of curry in food but there was something about this one we didn't like. 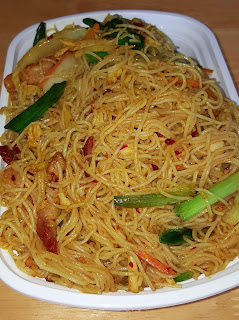 The men's bathroom had a sign on it not to use and a trip to the women's wasn't good. Pretty dirty. 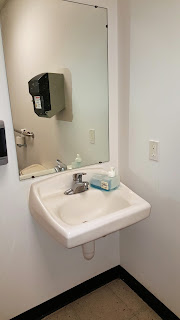 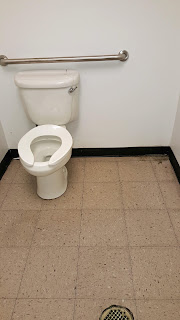 After all of our dishes were served, the man and wife came out and sat at a table next to us and began to eat. But before he sat down, he walked into the men's room and used it :-)

We had probably interrupted their planned lunch with our arrival which is why we received a disconcerting look when we first walked up to the counter. But kudos to this hard-working couple who puts out such great food! This is not your typical Chinese restaurant and although they have sweet and sour items on their massive menu, the food preparation is superior and highly recommended.

Posted by EatingOurWayThroughGrandRapids at 6:47 PM No comments: