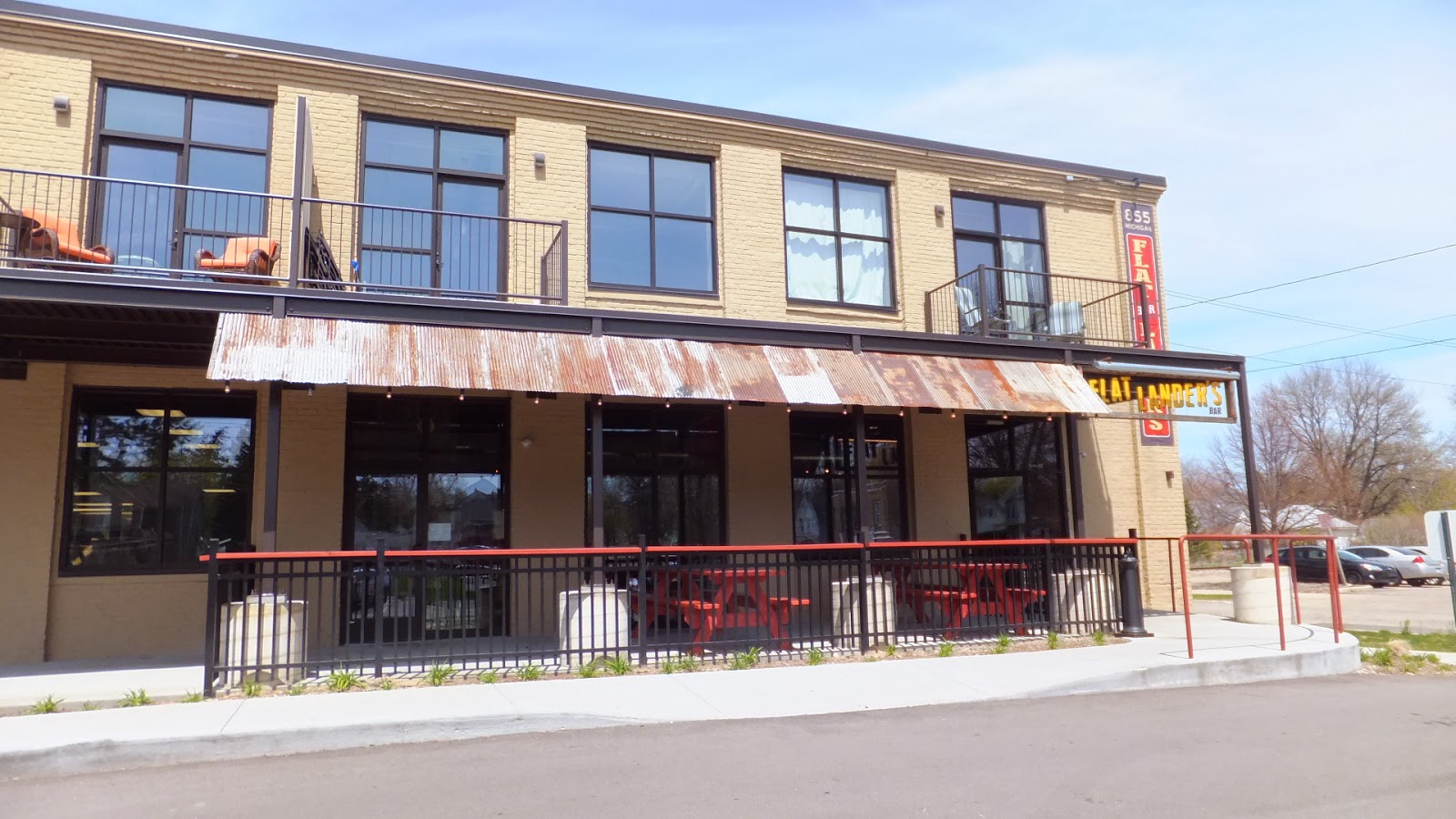 From the street, the building that houses the restaurant is not that interesting. It's somewhat nondescript and looks so uniform you expect it to be housing national chains, although it does have some nice-looking apartments with terraces on the second floor. A local butcher shop is next door and on the end, Snap Fitness. What becomes very interesting, however, is when you walk in the door. The bar is off to the left and has a few tables on two sides of the bar, but otherwise people take a few concrete steps down to find a place in the dining area. In the middle rear of the photo, you can see the Bird Cage stage where live music is hosted. The rear left view shows an alcove that holds two high-tops for six each, which is where we seated ourselves. Here's the view from there. 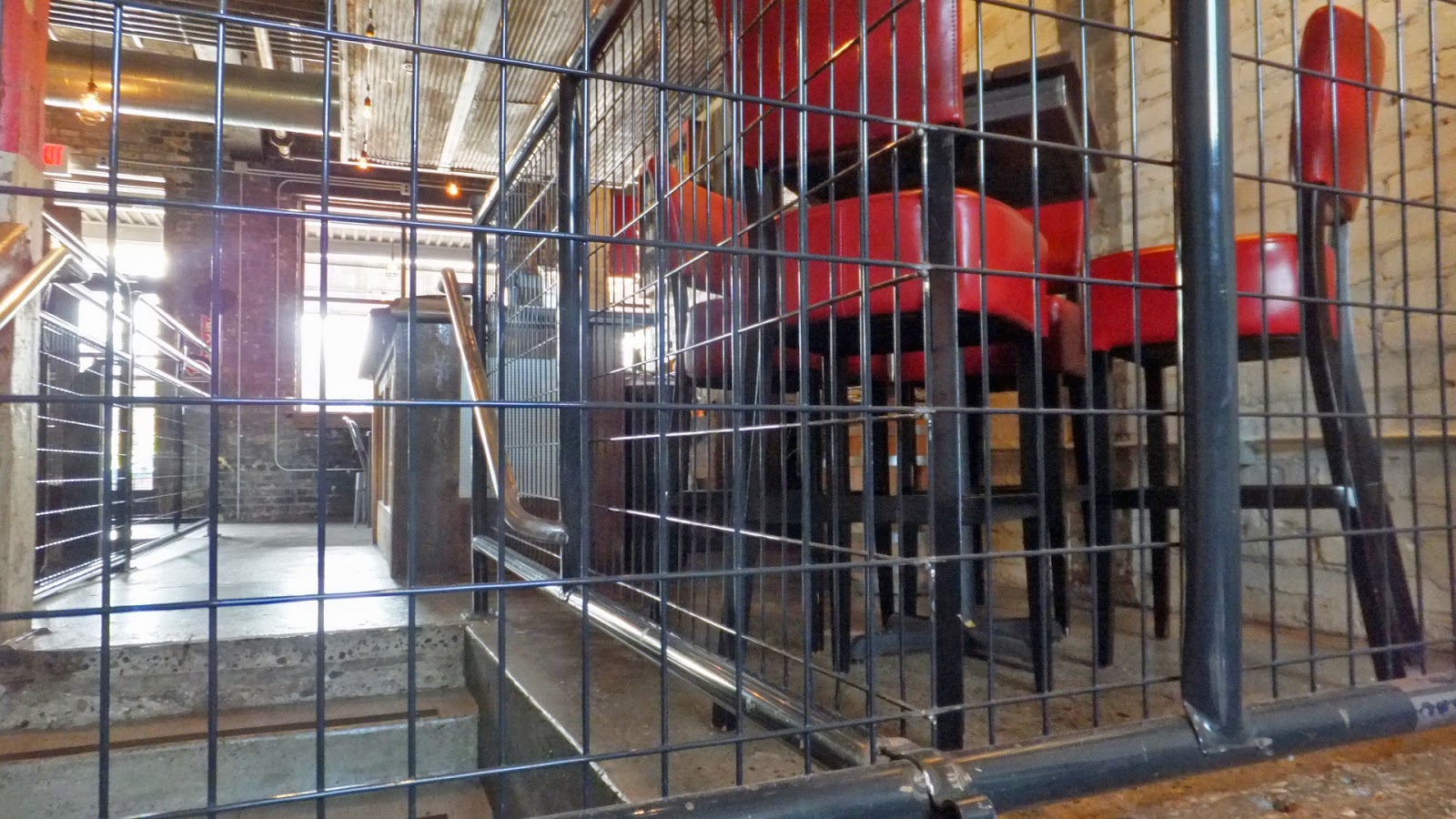 And here's the alcove, complete with old brick walls. 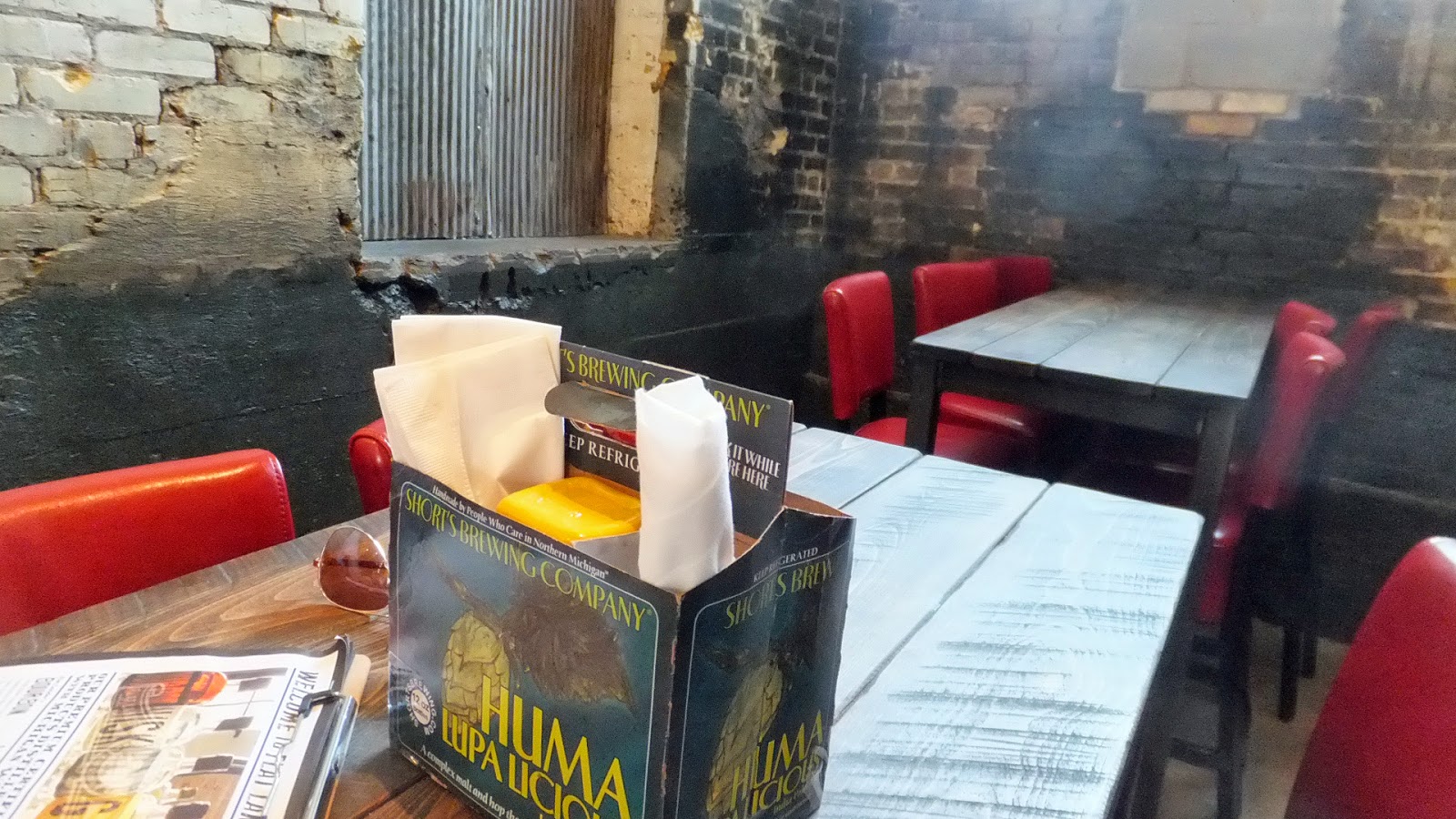 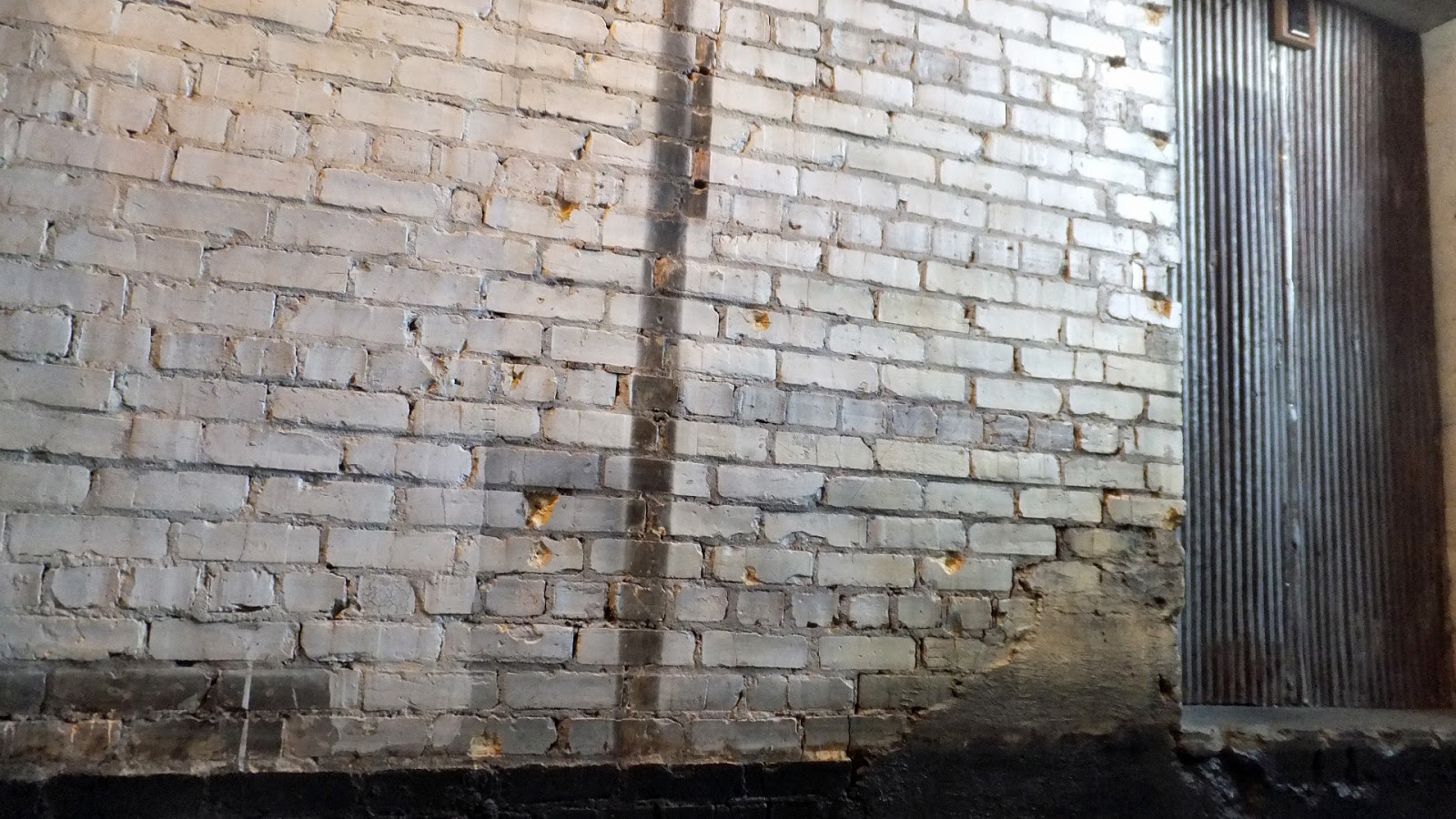 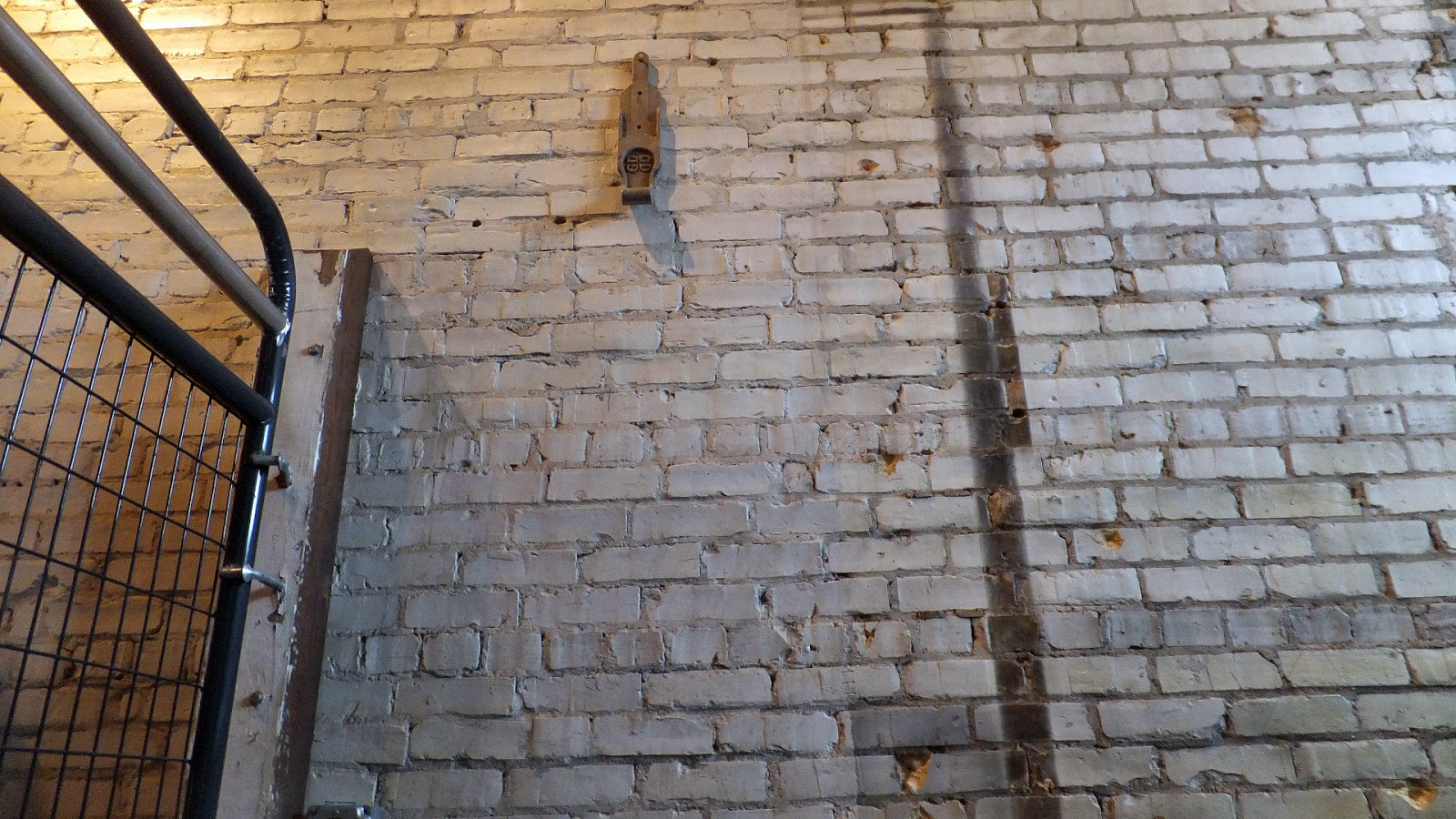 This is the old Miller Zeilstra Lumber Mill, and the original brick walls were preserved and exposed. Other old materials were brought in ~ barn wood, metal roofing, and old janitor doors from Michigan State University (you will find the doors in the restrooms). All materials that went into the furnishings are either recyled or re-purposed. This is such a cool space. 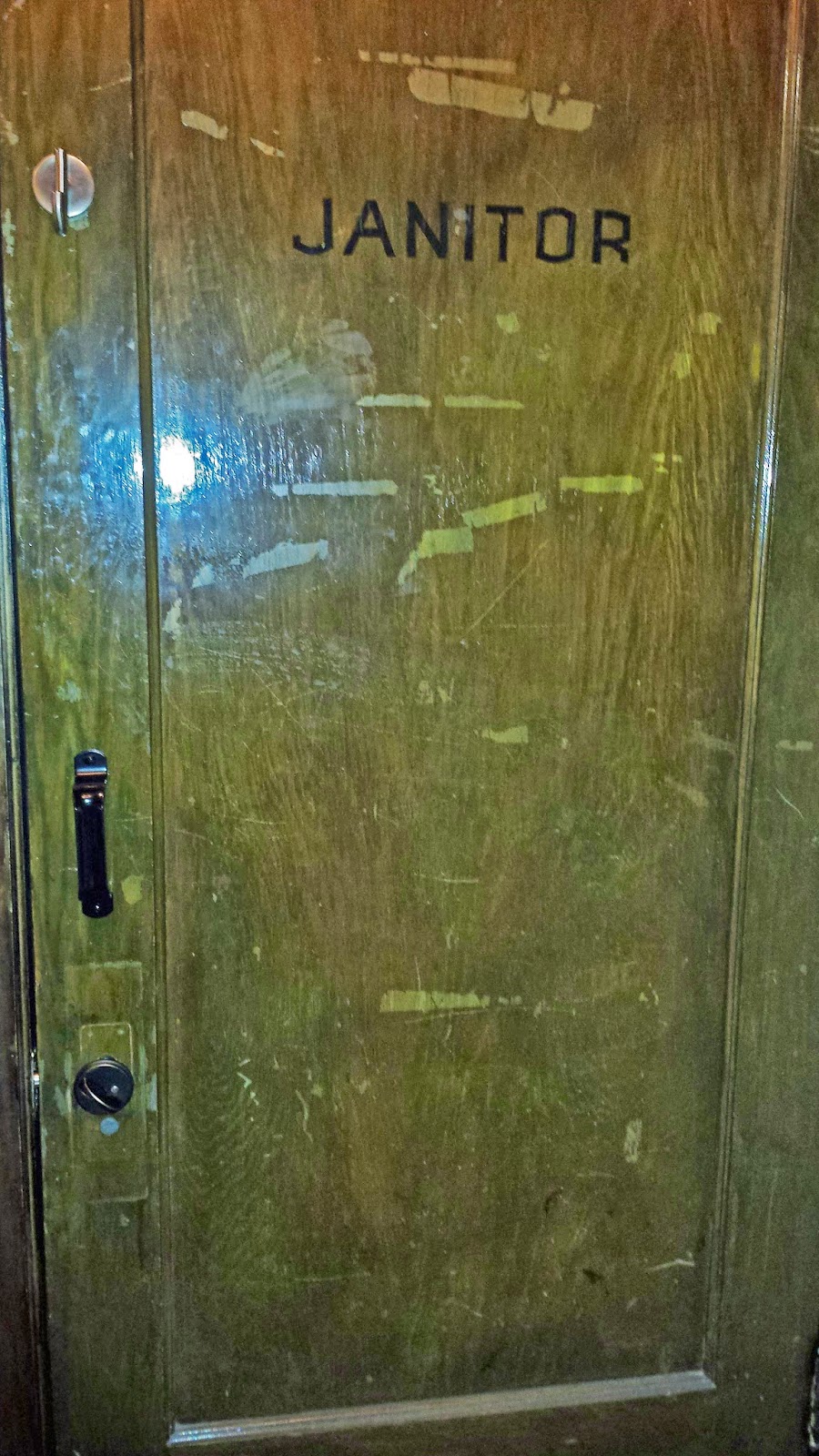 So on to the spirits. The barstillery's (as they liked to be called) focus is to offer certified organic products distilled in Michigan with Michigan water and grains. Apparently the actual distilling is happening in Three Oaks, Michigan for now but infusions and other creations are happening here on the premises. 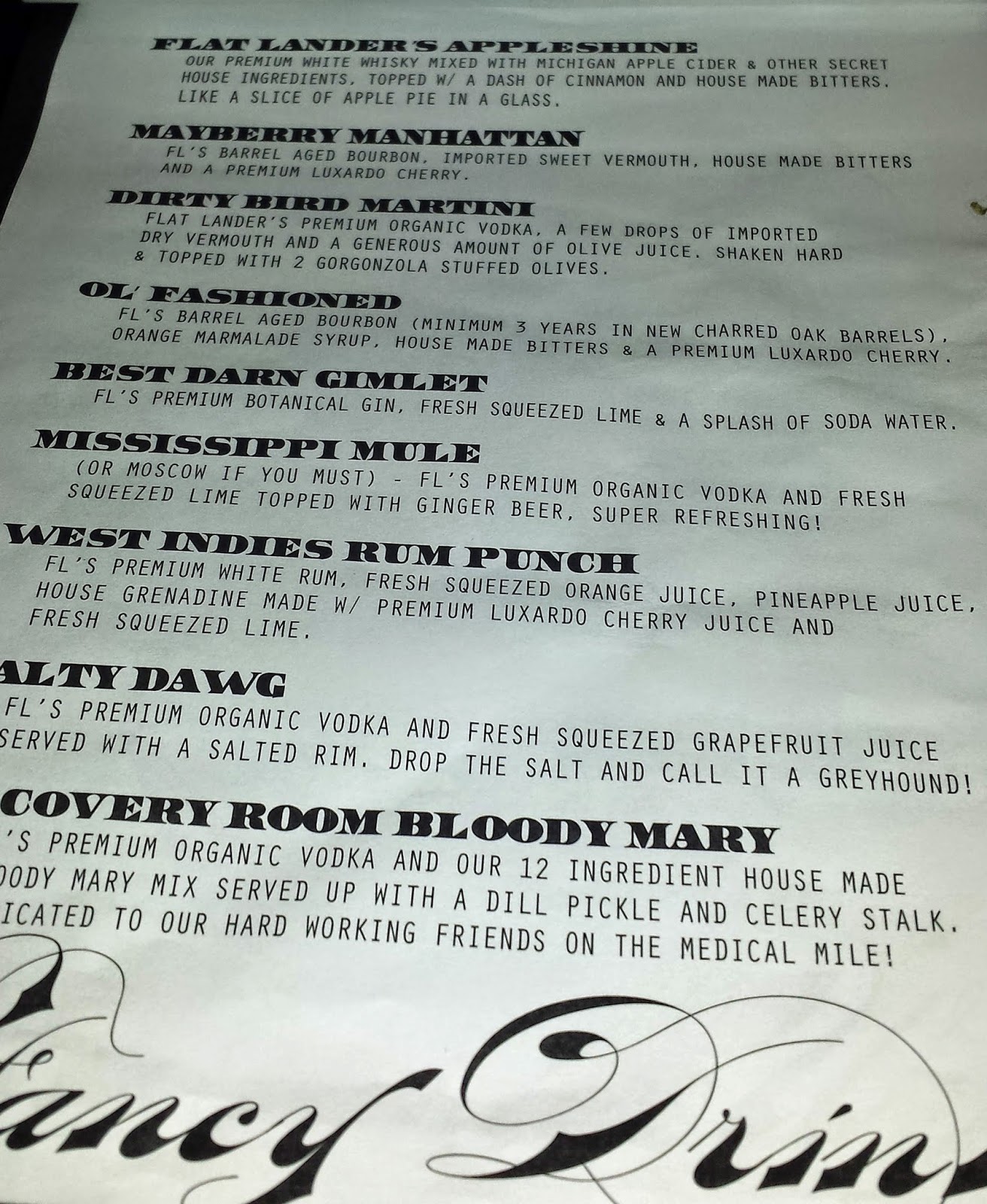 We don't usually have cocktails with lunch, even a late one, but here we couldn't resist. We ordered a Flat Lander's Appleshine (white whiskey and Michigan apple juice) and a Recovery Room Bloody Mary (organic vodka and house-made bloody mary mix). As promised, the Appleshine was apple pie in a glass, and the Bloody Mary was thick, spicy, and altogether wonderful. 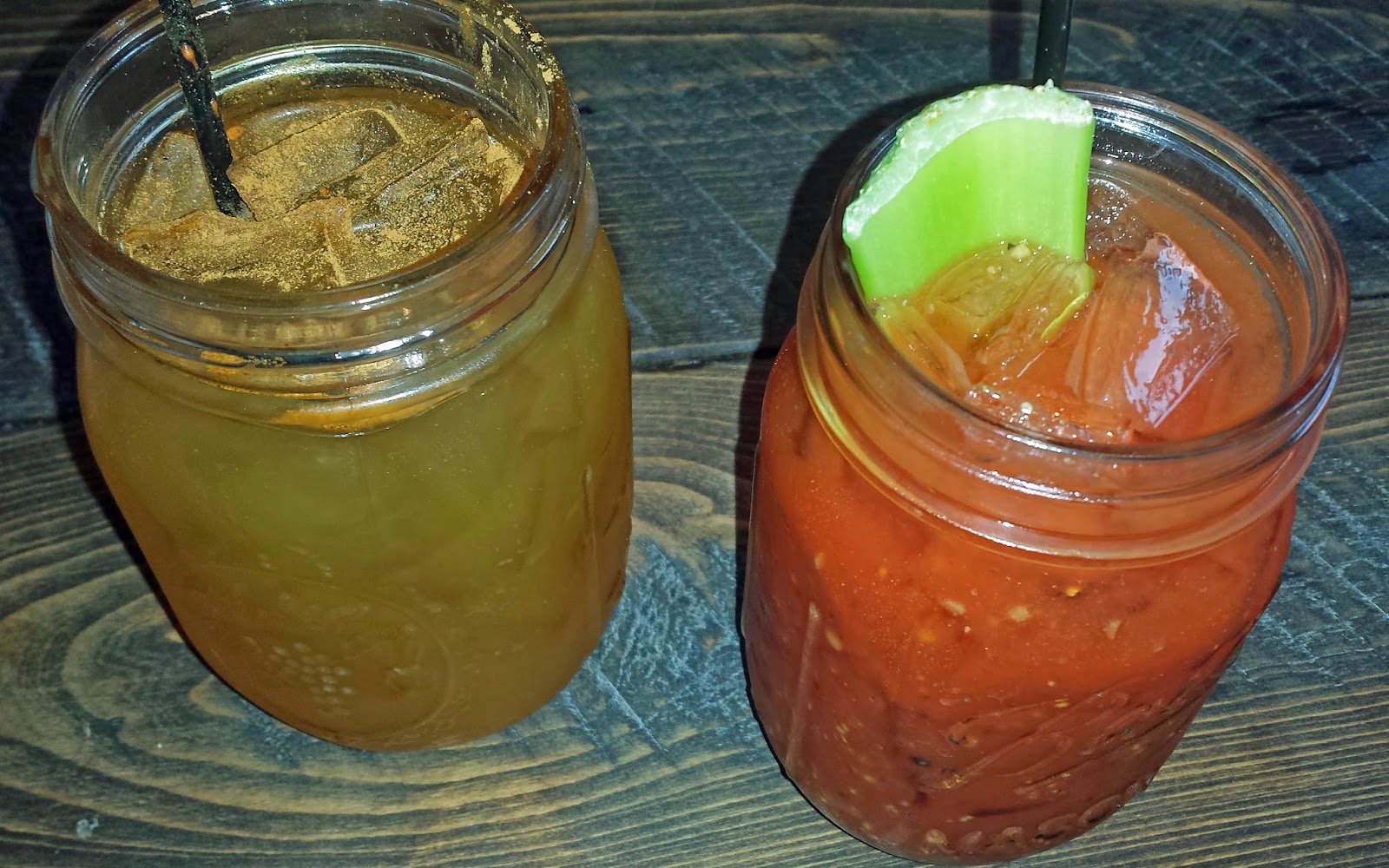 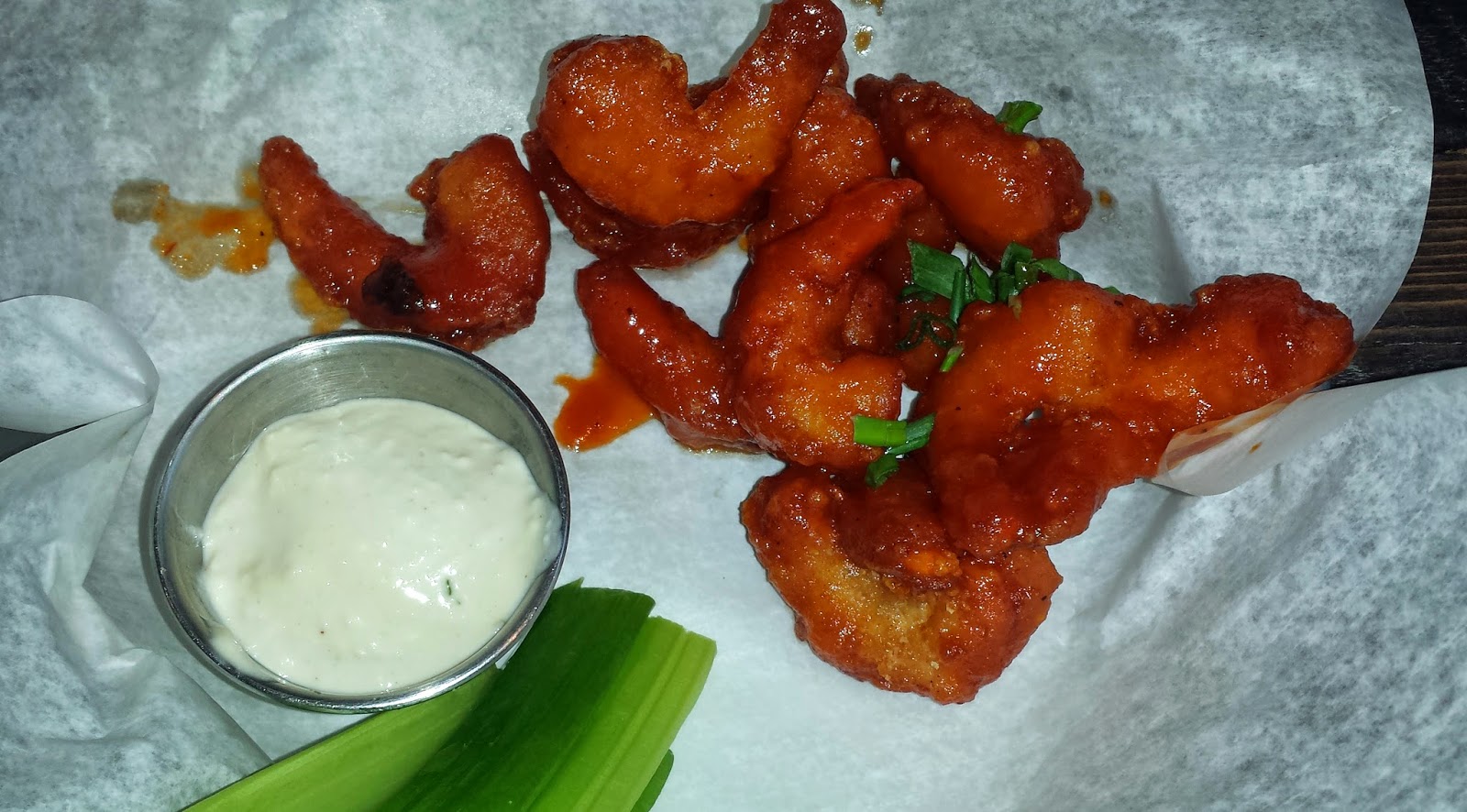 Matt ordered the Southern Pork BBQ, a pulled pork sandwich served with cole slaw, on the sandwich, along with pickles. The pork BBQ was fine but the cole slaw did not do anything to enhance the sandwich and didn't combine well. It would have been preferred as a side. 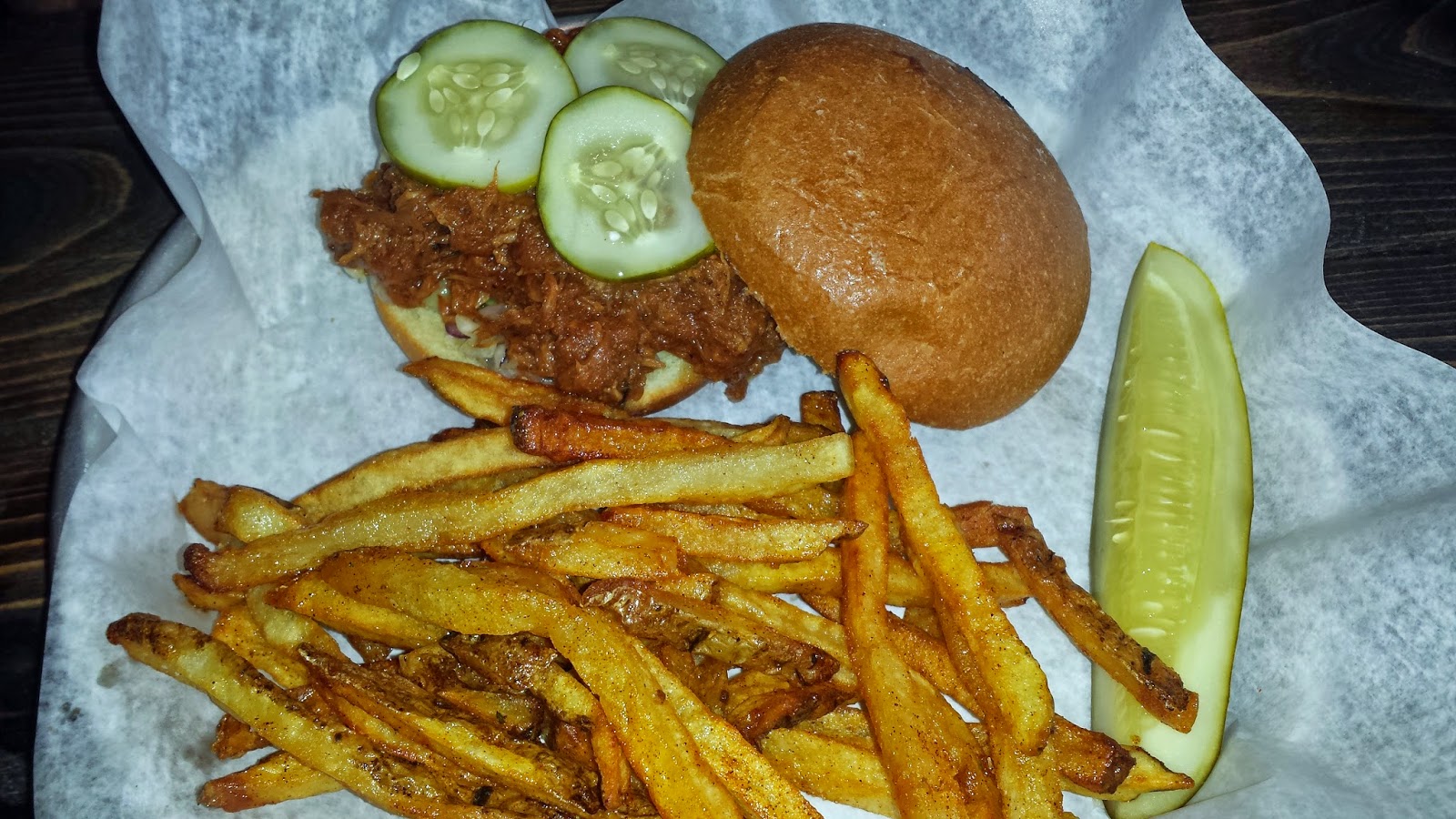 I ordered the Kapusta Burger, medium rare, which arrived medium rare, with some version of kapusta (great sauerkraut, not too tart), cheddar cheese, and spicy brown mustard. This burger is highly recommended. (I originally wanted to order the Flat Lander Burger but it sounded just a little too huge.) If you want anything but chips with your sandwich, there's an upcharge of $1.00 but that will get you fries, potato salad, or cole slaw. And I loved this potato salad, just for the record. The dressing was light and the potatoes were fresh. 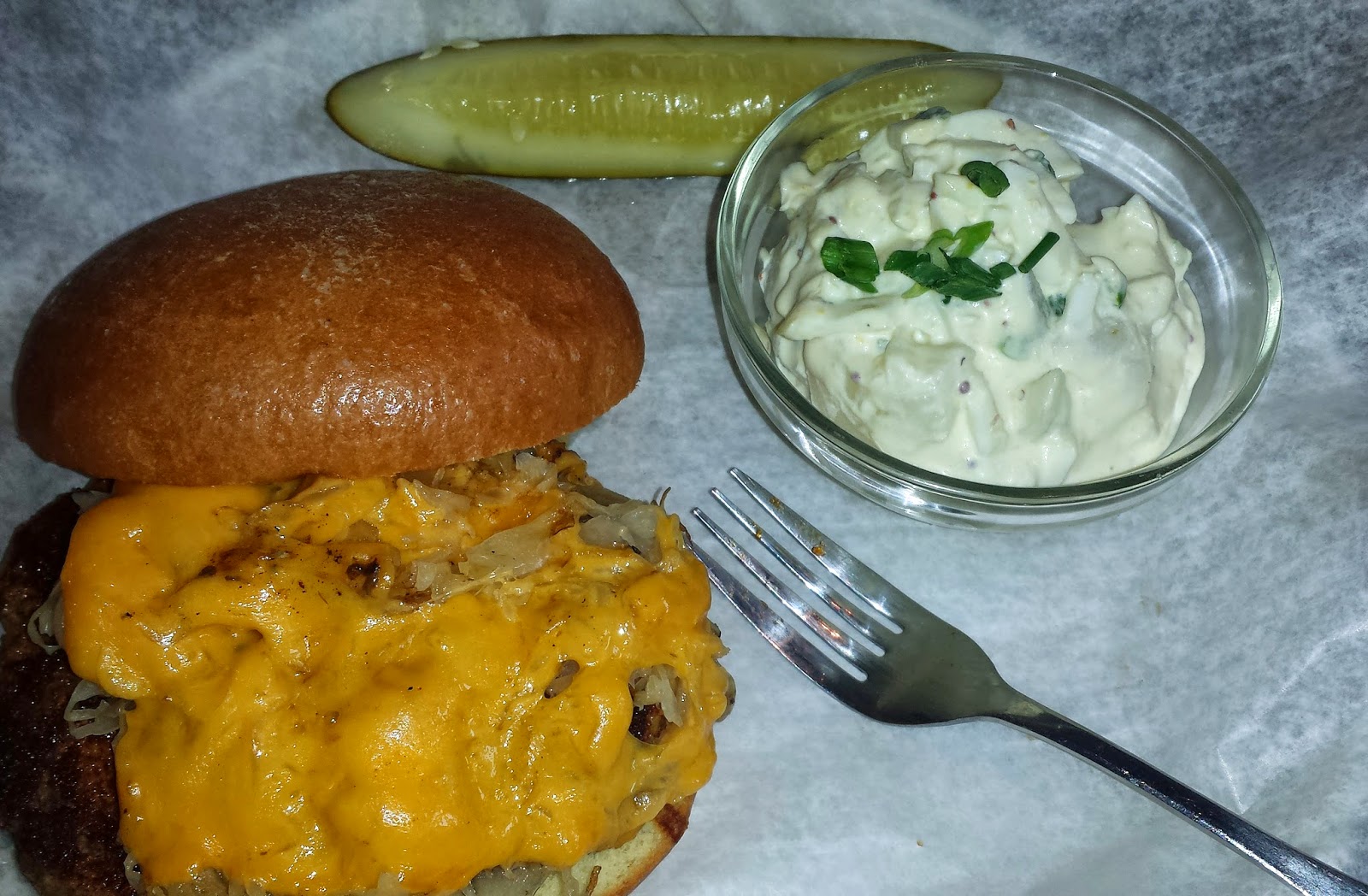 When we first walked in, there was no server or employee to be found and we assumed we were to seat ourselves, so we did. After more than 5 minutes, we spotted a server who let us know she would be with us shortly. It turned out she was the only server in the place and we cut her some slack. She was great overall. On the negative, there was a cook/chef seated at the bar each time one of us walked by to find the restroom.

The outdoor patio, which is ready to open, will certainly help the seating situation. Although you're looking at a parking lot and Michigan Street, at least you can be outside, community style. 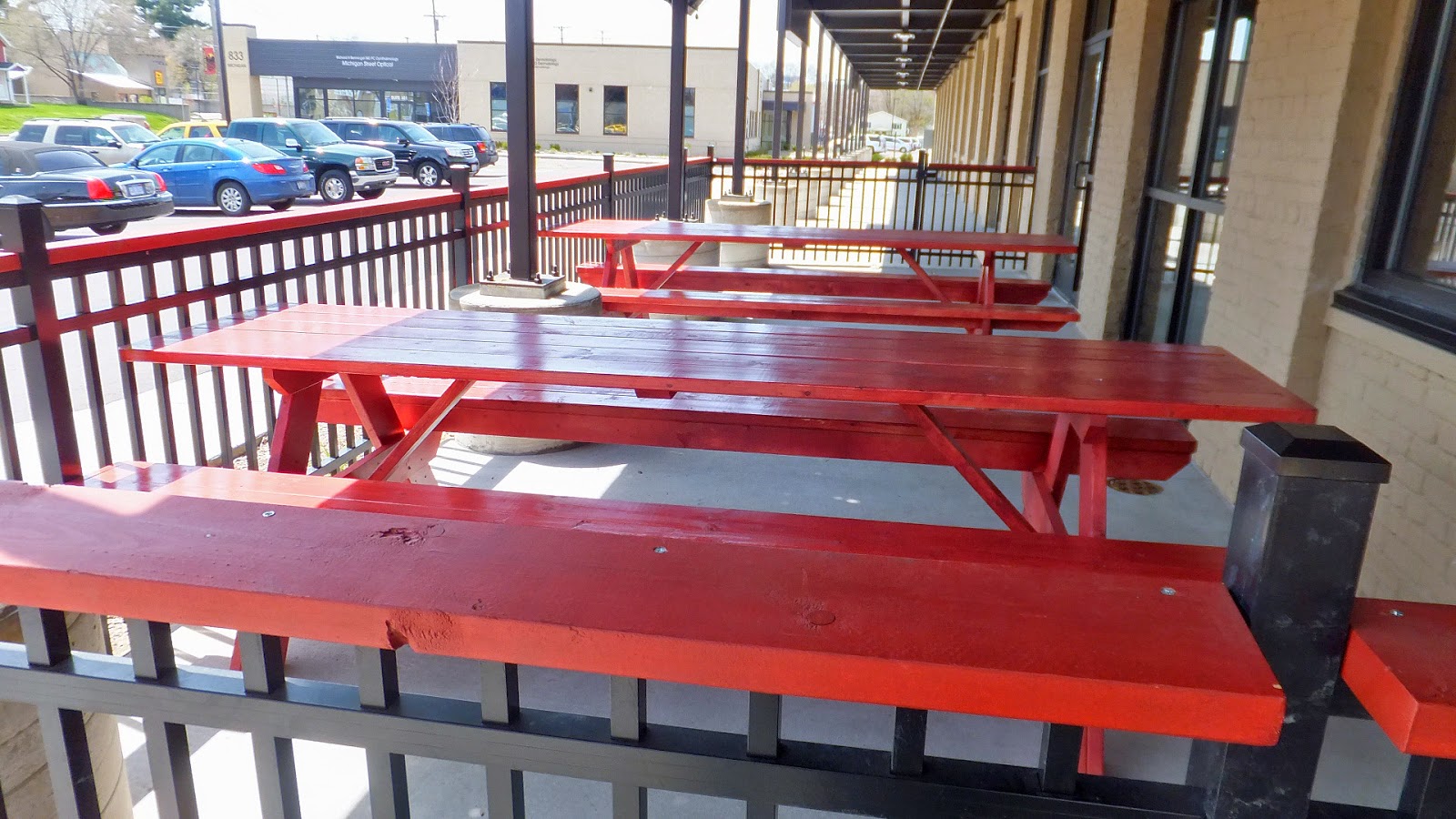 There's one last thing to talk about regarding this Bar & Grill and that is its vibe. They call it hillbilly chic and they're onto something. The soundtrack, playing loud enough to hear but not loud enough that you're shouting above it, ranged from Willie Nelson, CCR, Johnny Cash, and the Highwaymen, to the banjo/guitar duet from Deliverance and some good old timey country and rockabilly. 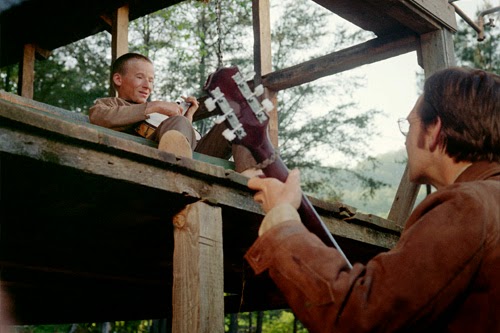 The name of the bar stems from the derogatory nickname given by people living in the mountains to those who live on the flat lands. People in Vermont use the name for any out-of-staters who visit, Wisconsin uses it for their Illinois visitors, and in Michigan, anyone living south of Saginaw is considered a Flatlander by those who live north. So the name is clever and appropriate :-) Check them out on Facebook and see the hillbilly wisdom they share every week, and definitely visit them in person. 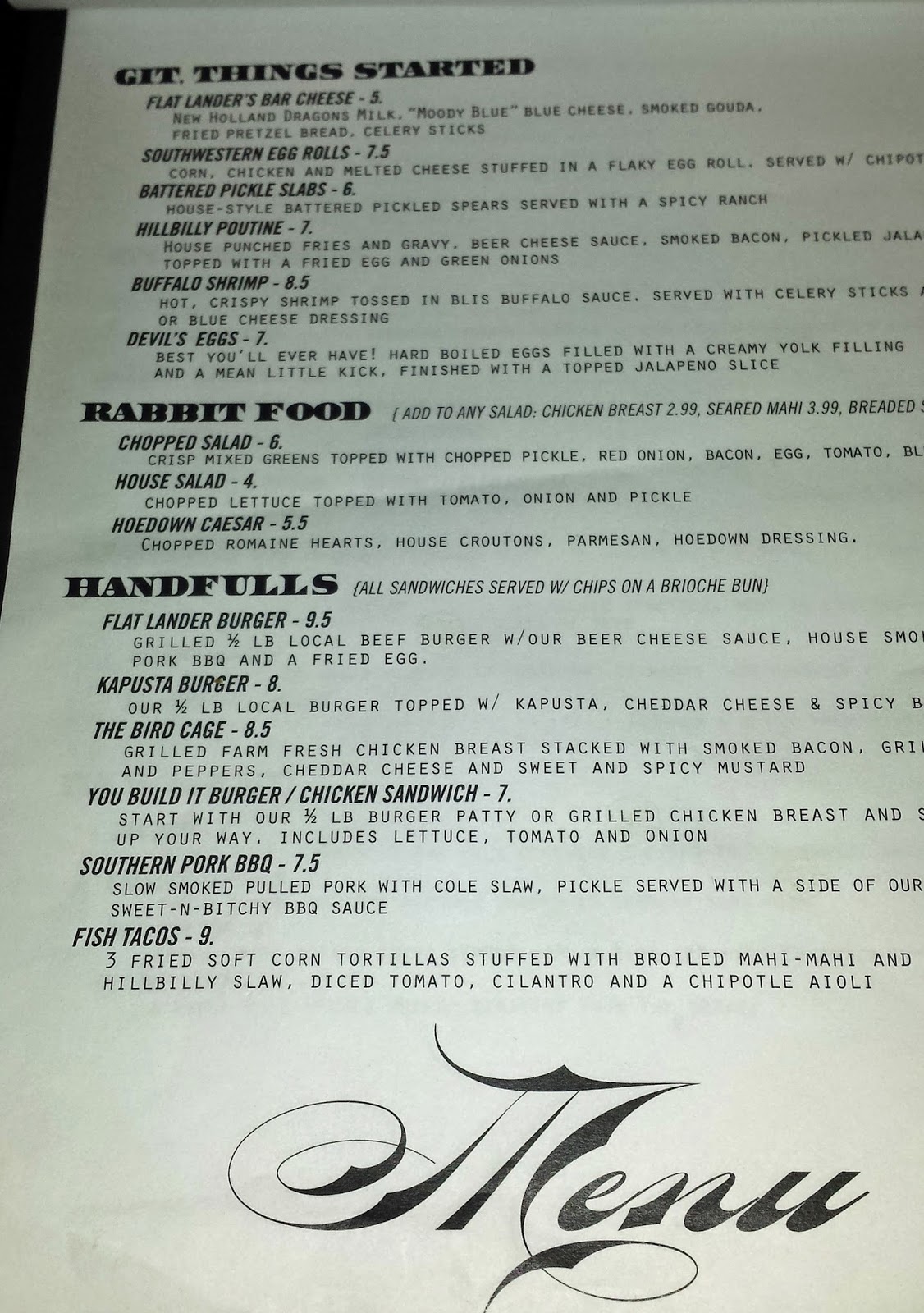 Posted by EatingOurWayThroughGrandRapids at 6:41 PM No comments: