It's a Friday night, the four of us are looking to meet for dinner, and it's Restaurant Week when you can enjoy three courses for $25.00 at many area restaurants. There were so many restaurants with great offerings but being last minute people we had to find one that was open to take reservations that day. And Bistro Bella Vita it was. 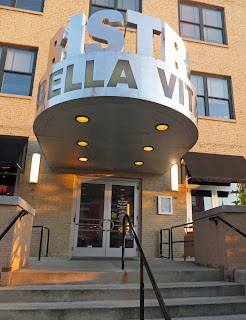 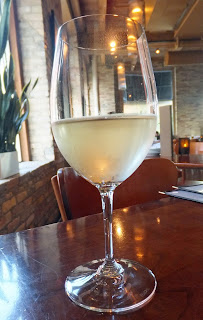 Our options of adding to the 3-course meal menu special were a bread-jam-butter choice or a cheese course but we went to the main menu for antipasta - Italian meats, artisan cheese, garnishes, & crostinis. We've had it here before and it never disappoints.

Then we selected from the 1st course options from the 3-course menu: three of us chose the House Made Sausage (cotechino sausage, brussel sprouts, apple mostarda, pecorino), 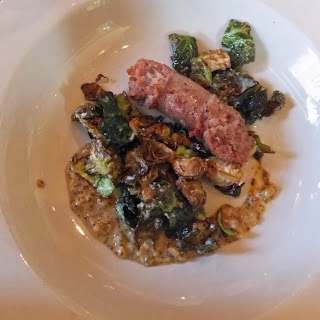 Both dishes were beautifully presented and there was nothing to complaint about. But we were soon on to our second course options. One order of Amatriciana (house made guanciale, farm tomato sauce, gnudi, parsley, pecorino) was placed upon our server's recommendation but it ended up not being a favorite of ours. Guanciale (pig cheek) was too fatty. The few lean pieces were overwhelmed by the tomato sauce, which was delicious in its own right. The gnudi (a lighter, cheesy type gnocchi) was exquisite, however. 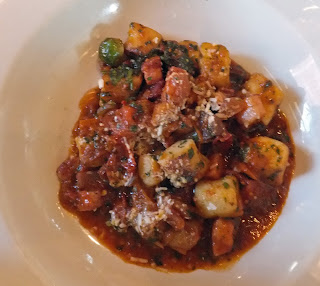 The next choice fared better - Cioppino (shrimp, lobster boudin, scallop, salmon, mussels, romanesco, fennel, heirloom tomato, in lobster-chili broth). Ordering seafood in the midwest is always a risk but tonight's offering was fresh and tasty, and the romanesco was a nice touch (Roman broccoli, a variant of cauliflower). The last two diners both selected the S & S lamb "Paella" - lamb chop, roasted lamb, lamb sausage, and braised lamb, accompanied by peas, peppers, saffron basmati, and smoked tomato vinaigrette. That was a lot of lamb, but there were no mutton complaints, and the rice and vinaigrette made for a very nicely balanced dish. 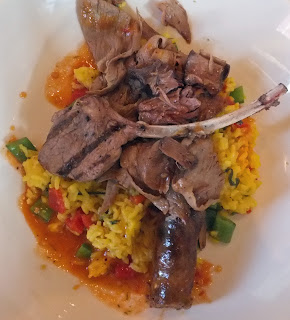 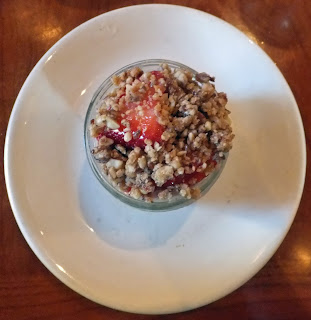 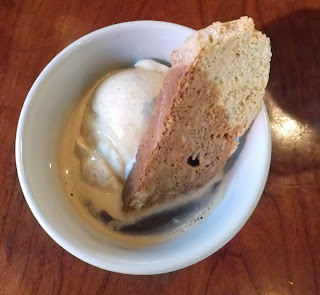 This is one of our favorite restaurants and tonight confirmed that. Our server was attentive and knowledgeable, and the food was creative and interesting. Their sister restaurants, The Green Well and The Grove, are also part of The Essence Restaurant Group who emphasize natural and local, sustainable business practices, and it shows.

Posted by EatingOurWayThroughGrandRapids at 6:27 PM No comments: 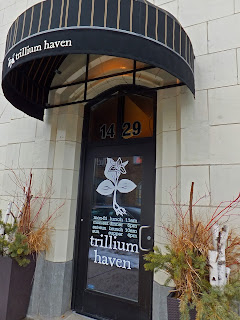 After our first time we decided to wait for a second visit to write up the restaurant. But lo and behold, by July the owners had been re-shuffled and the name had been changed, mostly. 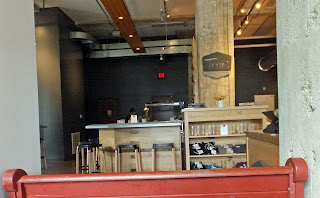 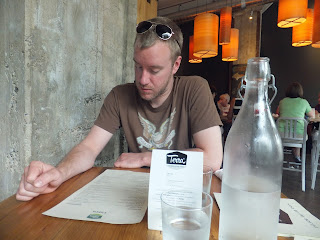 Digging up old notes we found that back in February we enjoyed a beautifully tangy, organic cream of tomato soup, the Trillium Cuban sandwich, and Mac & Cheese. The soup was amazing, the Cuban sandwich rated up there with the one who orders and rates it wherever possible, and the Mac & Cheese, with its sauce thickened with cauliflower & parsnips was delicious. 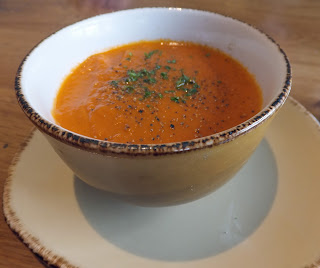 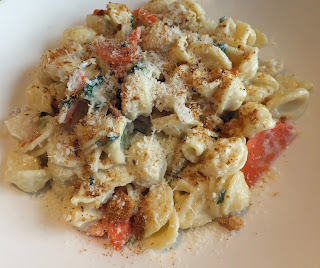 Spring forward to July ~ we began with pickled crudite, and a half Cobb salad, ordered a fried egg sandwich, and the now called Terra Cuban, with a side of Mac & Cheese. So it was an inadvertent partial repeat but things were different this time. 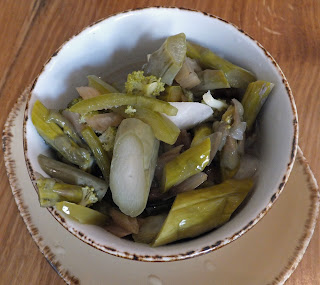 The pickled farm veggies were wonderful, but the Cobb salad contained a glob of blue cheese that should have been crumbled. 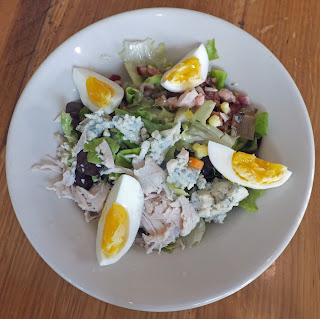 The Egg Sandwich came nicely sunny side up with bacon,
greens, and garlic mayo, complete with cloth napkins. 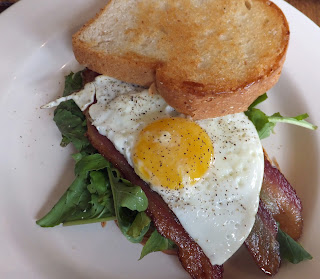 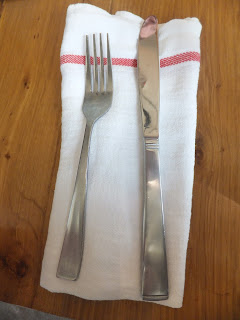 Terra Cuban (house smoked pork, bacon, swiss cheese, McClure’s dill pickles, dijon mustard, mixed greens on house made baguette) was better in February. The mustard was barely detectable today, which made for a sandwich that was greasy on the plate (from the bacon) but dry otherwise. But the pasta was again exquisite: orecchiette pasta, wilted greens, cheddar cheese, and in July, thickened now just with cauliflower.

Service on both visits was exemplary and the interior continues to exude a cool atmosphere. The large space is divided into two main sections - the bar featured on one side, and the open kitchen on the other. The ladies room is an old vault and storage room and rates up there with the coolest restaurant ladies’ rooms. 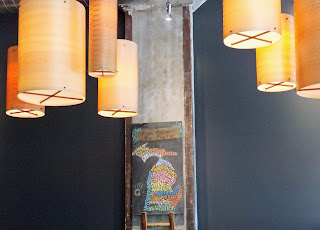 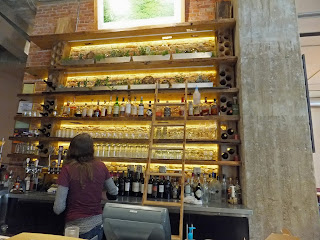 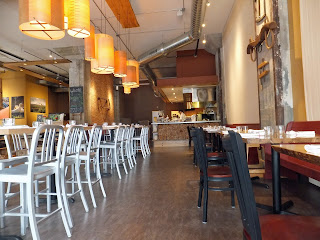 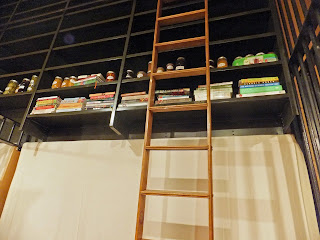 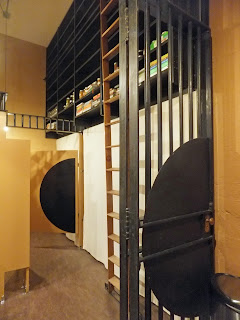 The John Deere tractor is gone and the lovely summer deck is very inviting. 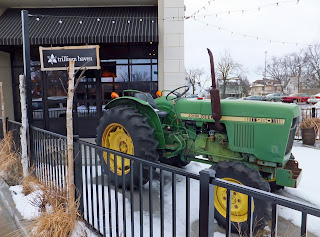 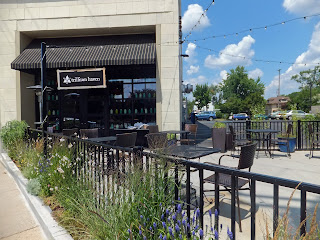 Unusual for a restaurant anywhere, we saw staff eating at the bar during our July lunch - not a positive note. We’ll be watching to see how the restaurant evolves but all-in-all, this one is worth your time.

Posted by EatingOurWayThroughGrandRapids at 6:08 PM No comments: