Today we drove on a whim down Grandville/Chicago Avenue to see if we could find a small, unknown, local restaurant ~ because we love doing that. We happened on this place straddling a corner at Chicago Drive and Godfrey, across from Holy Name of Jesus Parish on Godfrey and a McDonalds on Chicago Drive.

Aztec or Mayan art decorates portions of the six-sided building but around back it's plain with the parking lot and two entrances. 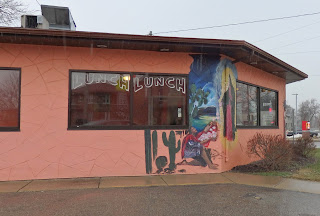 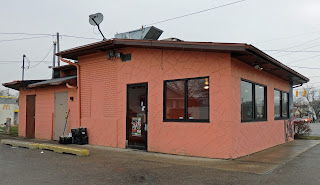 When we walked in it looked like it was counter service and we did the awkward looking-around-trying-to-figure-out-the-place-thing with the locals staring at us. But we spotted a woman waiting on a table so we grabbed two menus off the very large counter and took a seat.

The place holds about 11 tables/booths wrapped along the exterior wall which is lined with windows so everyone has an outside view, except for this table for two. And there's a big booth down at the end. 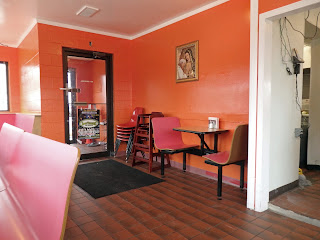 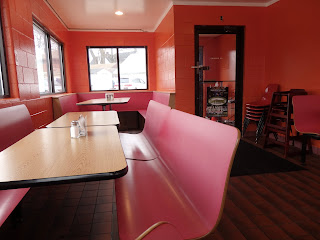 The kitchen is open from the counter view and we spotted two men working there. The one and only server was continually cleaning when not waiting on customers. And the place is spotless. When I later walked into the Ladies' Room I saw washing your hands instructions in Spanish and English, along with the old washed-the-floor water. Well, at least it was washed. 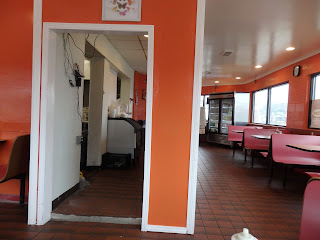 We were quickly served chips and salsas, green and red, and both with a nice kick. 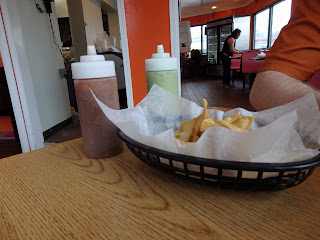 Water took a bit longer to come by and unfortunately arrived in large styrofoam, lidded cups. But the food did not disappoint. We selected from a simple two-page menu, complete with a hamburger with yellow cheese :-) 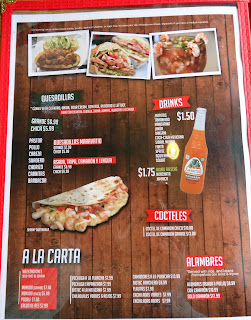 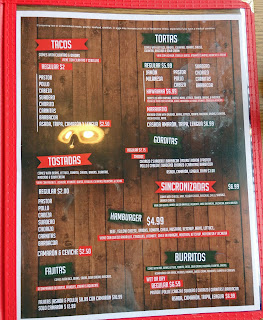 We each picked two tacos and a gordita. Steak, Chorizo, and Barbacoa tacos, and steak Gorditas. There was absolutely nothing to complain about. Fresh cilantro, plenty of limes, and other vegetables accompanied our food. 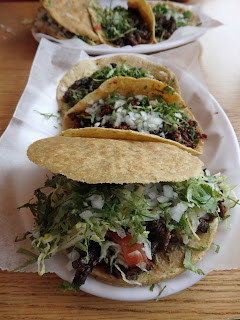 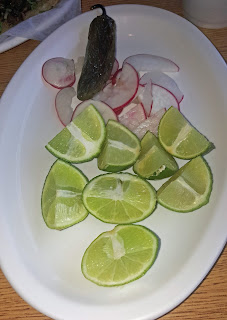 And most importantly, the tortillas are made in-house and that was obvious. This place rivals San Jose Taqueria and should definitely be visited. We needed to go back to the counter to pay, and that took a while on the old cash register. While I was waiting, the cook put a huge bowl of soup/stew on the counter and I asked our cashier/server if that was for her. She said it was and it was a concoction of meat and vegetables and soup, and she hadn't eaten all day. It was steaming hot and looked delicious! Hey, that wasn't on the menu...

There are two TVs back to back but nothing was playing, just a low-key music soundtrack. Decor consisted of a picture of John Paul II and a painting of a pope with Mary. But with all those windows, there isn't room for much more. 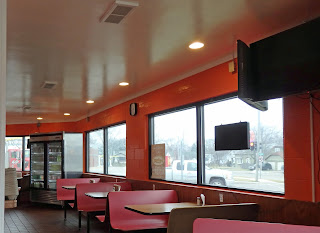 The tables are numbered by a taped up paper number. Not so classy but whatever works. 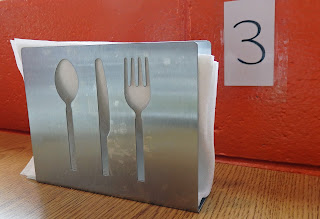 There were crazy locks on the way out, modified during the day by tape. 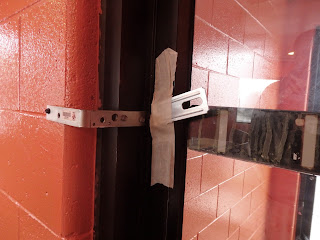 There's not much internet information available about this place but it looks like it used to be the El Kiosco Tapatio Restaurante. What is was before that we have no idea. It looks like it was some sort of fast food chain. But this is a lovely reincarnation of a unique building and an obvious local favorite from what we observed. Freshly prepared food in a clean, local restaurant with house-made tortillas - what more could you ask?

Posted by EatingOurWayThroughGrandRapids at 7:11 PM No comments: Links to this post