This may be a strange pick for lunch. It’s a bar located in a light-industrial part of town and has a reputation as a biker bar. We heard some talk that the food was good so decided to check it out. As we drove up, the street parking looked full in front of the bar so we parked the block before at an open metered spot. As we’ve learned to categorize them, this was a "cheap" meter. We walked the block to the bar and noticed that both sides of the street were unmetered. Ok, joke was on us.

We walked in and for a moment we couldn’t see what we were walking into but as our eyes adjusted, we made our way to a booth. We shared the restaurant with two men at the bar, and our server. Long and narrow, the restaurant has a live music stage and four booths along the far wall, two small tables and the bar on the inside wall, and two long, tall tables in the middle, seating eight each. On the other side of the bar is a pool table room, about the same size, with more tables and seating around the perimeter. Small TVs with sports and keno are everywhere. But we were there for the food.

The appetizer selection offered nothing particularly unique so we ordered Beef Quesadillas, and they were excellent. When asked what she would recommend for lunch, our server suggested the burgers or the French Dip Sandwich. She also mentioned that the women who had just arrived had driven from Holland for the French Dip Sandwich. (That they had taken a baby with them to a smoking restaurant, and they were also smoking but that's another story.) But that decided it - two orders of the Rocky Balboa French Dip Sandwich, one with spicy fries and one with steak fries. The sandwich was served on a fresh roll, the grilled steak with melted Swiss cheese, roasted peppers, onions, and au jus. Very, very good. Between the fries, the spicy won for their flavor. Service was good, but there were only two others to serve (plus one baby). We plan on returning again to try the burgers - but it won’t be at night.

Posted by EatingOurWayThroughGrandRapids at 7:01 PM No comments: Links to this post 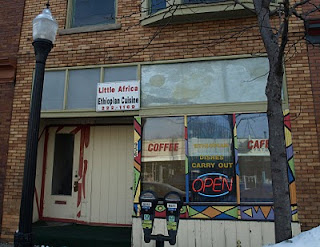 Curiosity drove us to try this restaurant for lunch and a unique experience it was. The small space had nine booths and a small walled-off area that contained the kitchen. Decor is stark and uninteresting. One man served as cook and server. His English was limited so we were pretty much on our own regarding menu selections. The menu had nine items, each with a short description and photo. About half of them described a sauce or paste and we couldn’t figure out what each was supposed to accompany. The combination platter seemed the way to go but again, we had trouble deciding which items to select and hoped we could get a set selection.

To start, we had the spiced hot tea and a can of Coke. When our server/cook returned, we asked about the combination platter and he nodded and walked away. We weren’t sure what had just happened. Shortly thereafter he brought us bowls filled with a mysterious pink substance. We first thought it was a soup of some kind but he said something about washing so we think we were supposed to wash our hands in it.

A large, very attractive, platter of food then arrived that held each of the nine items on the menu. It was difficult to discern which dish was which as the food didn’t look like the photos. No utensils were provided so we assumed we were to use the flat bread to eat. This Ethiopian bread, called Injera, is very thin and soft with a spongy consistency. Rolls of it sat around the platter and one large round piece lay beneath the food. So we dug in and the food was delicious. Gomen (collard greens) Soy Curry, Alica (fresh vegetable mix) Tomato Salad (garlic, red wine & lime dressing), Spicy Red Lentils (curry, cayenne, ginger, garlic, and red onion) were among the many flavors on the platter. By the time we were finished, we wanted to roll up the leftovers in the platter bread and eat it like a taco. We missed our forks and being able to get more information but overall loved the food. If you’re looking for interesting food outside the American norm, try this restaurant. If you need meat at each meal, you’ll have to skip this restaurant.

Posted by EatingOurWayThroughGrandRapids at 7:41 AM No comments: Links to this post 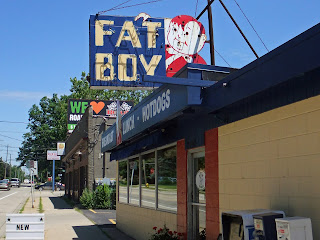 The vintage sign can't help but catch your eye, and the name alone should make you want to stop at this restaurant. A small restaurant, decorated in authentic memorabilia from the 1950s-1980s, including concert posters and an antique jukebox for 45s, it is quaint and original.

The original owners commissioned the sign back in the late 1940s-early 1950s, and the neon landmark has hung here ever since. The place has changed hands several times and in 2009, the current owners remodeled, re-opened, and re-lit the sign. 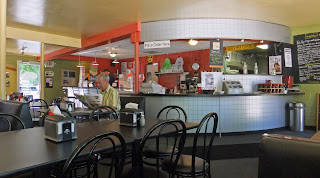 Newcomers are spotted when they sit down in a booth to wait for a server. Here the menu is on the wall and you need to order at the counter. The waitress brought our burgers shortly thereafter and they were amazingly good. No perfect-circle burgers here - just great flavor from the smashed cooking method. The restaurant is open for breakfast and lunch. 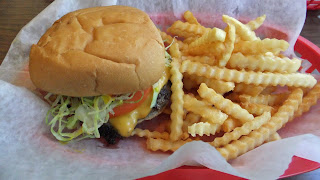 If you are craving a burger, please skip McDonald's and head to Fat Boy (or Choo Choo Grill)!

2/26/15 Visit:
A few things have changed but not much. The burgers still have the same great taste and irregular shape, and the onion rings are well prepared and sized. 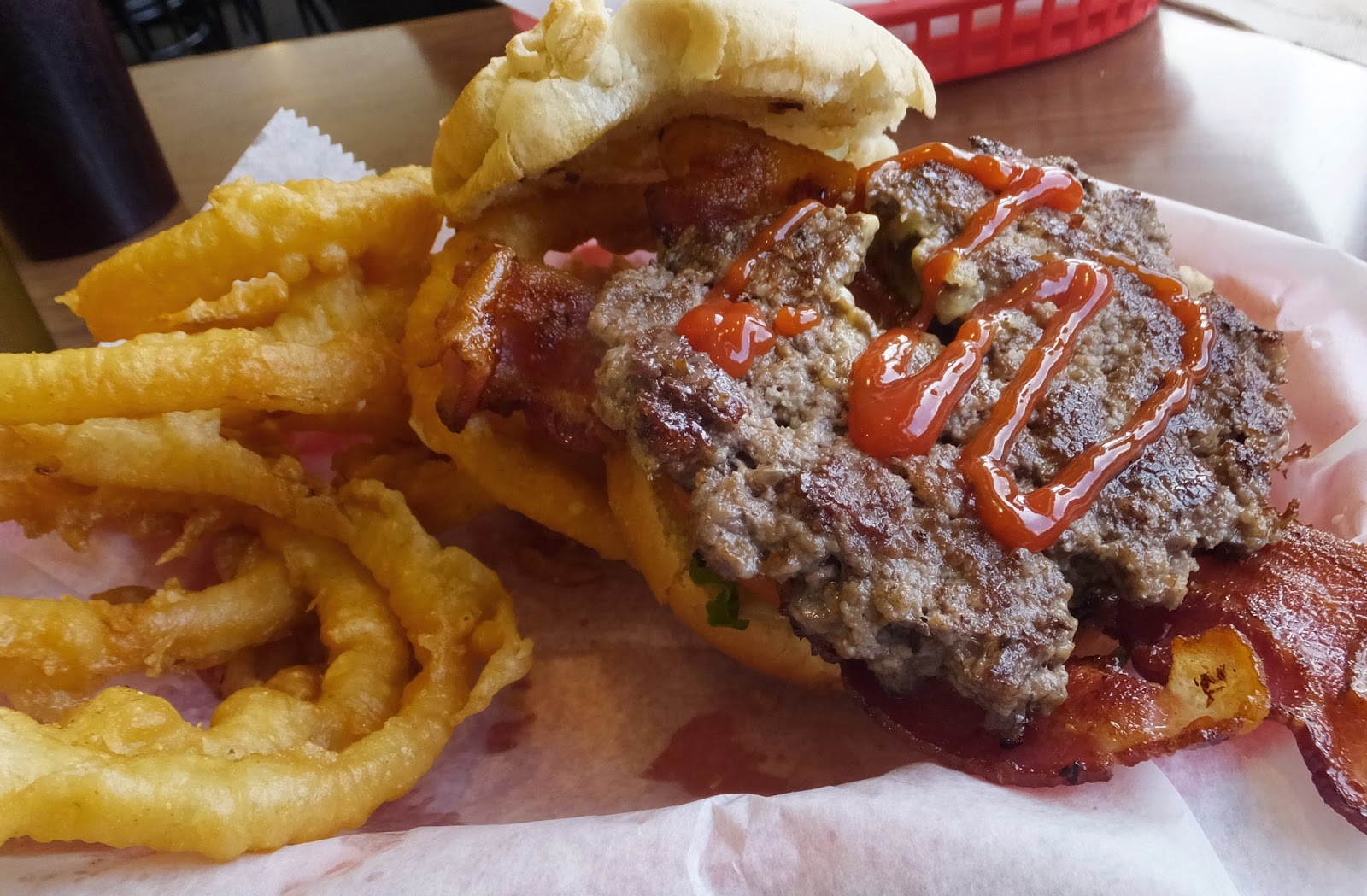 The menu is still on the wall, you still help yourself to coffee, and you order at the counter. 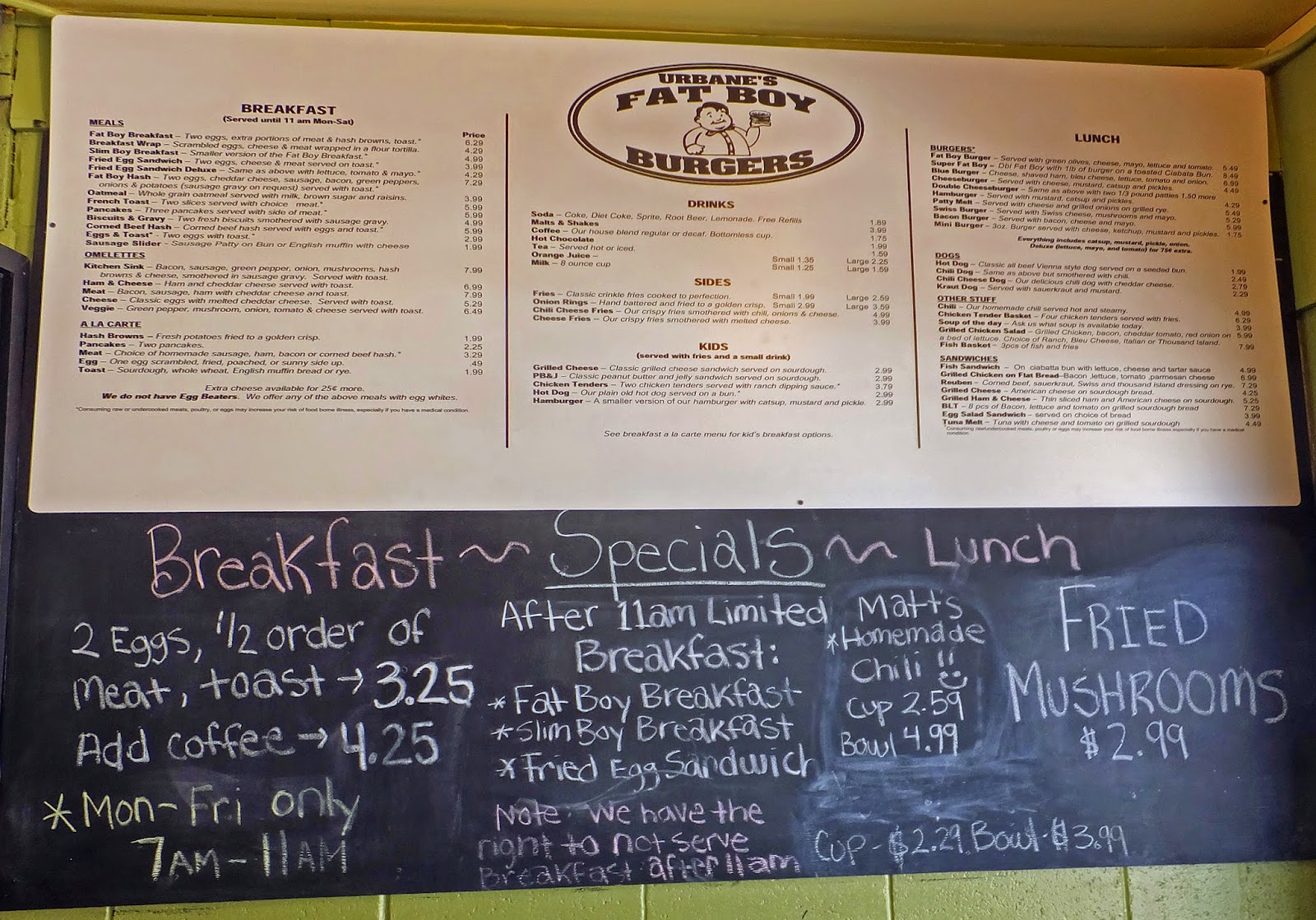 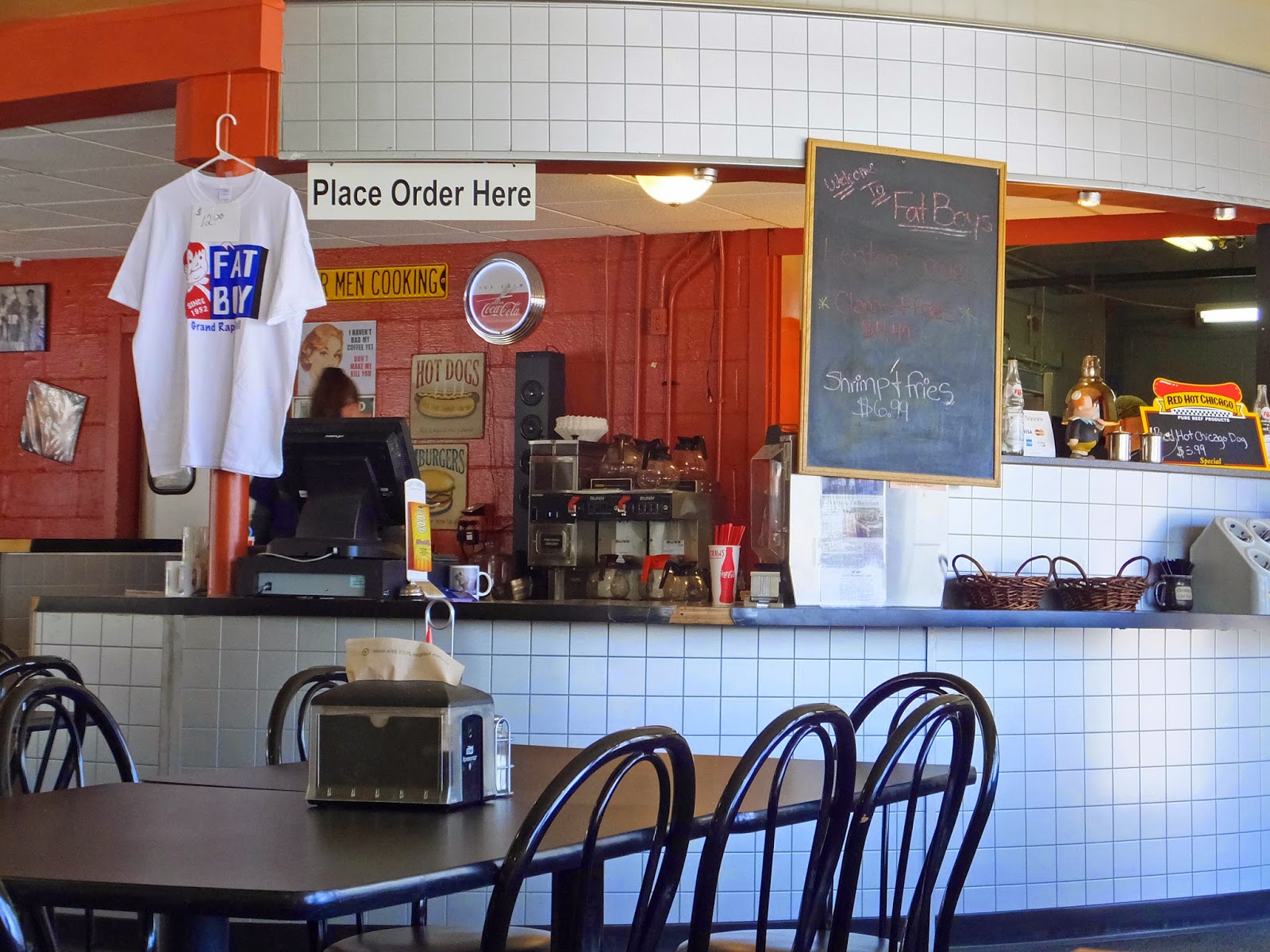 The interior looks pretty much the same with the addition of a ceiling fan, that inexplicably started turning and blowing the already cold air throughout the place. 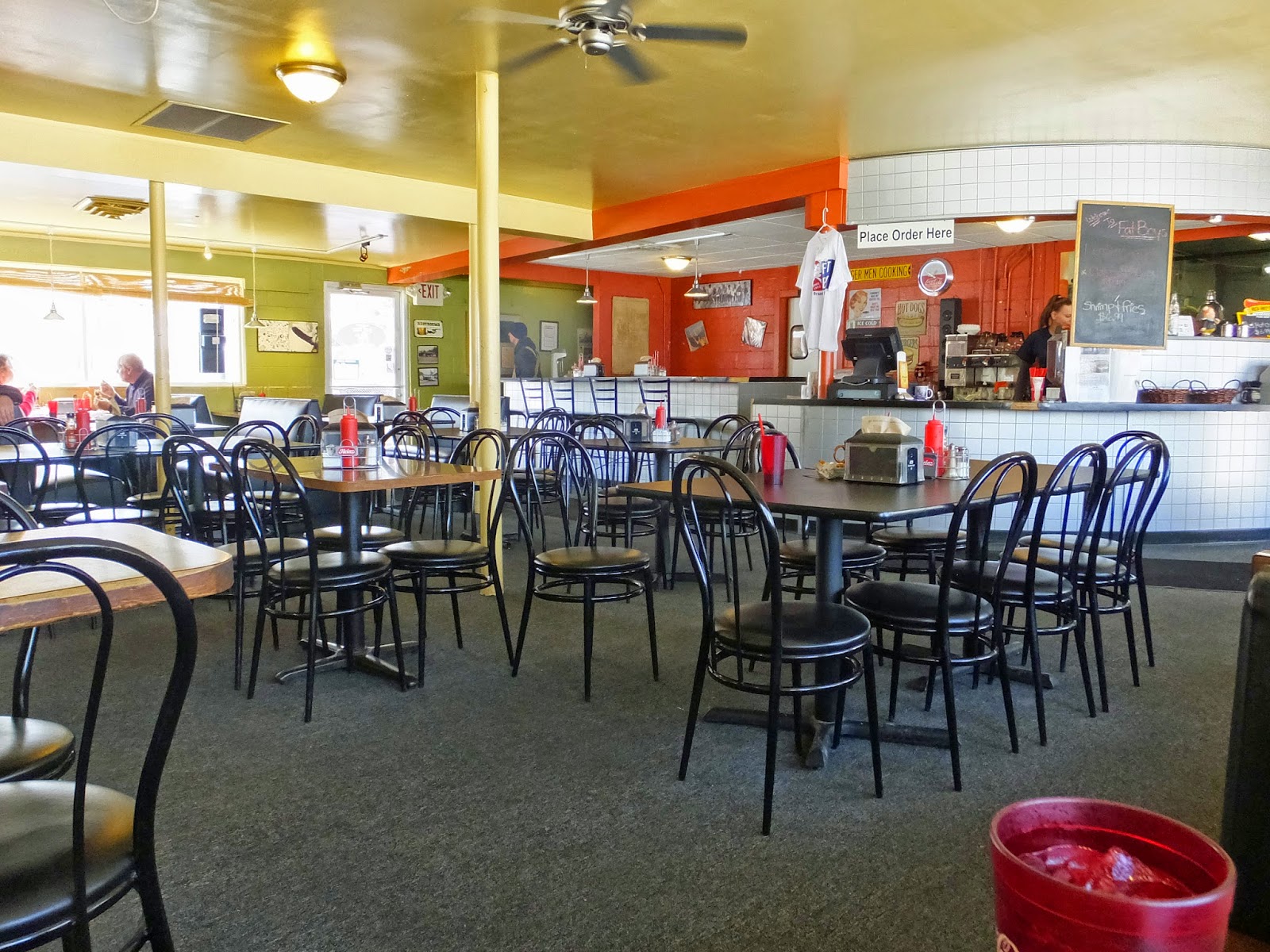 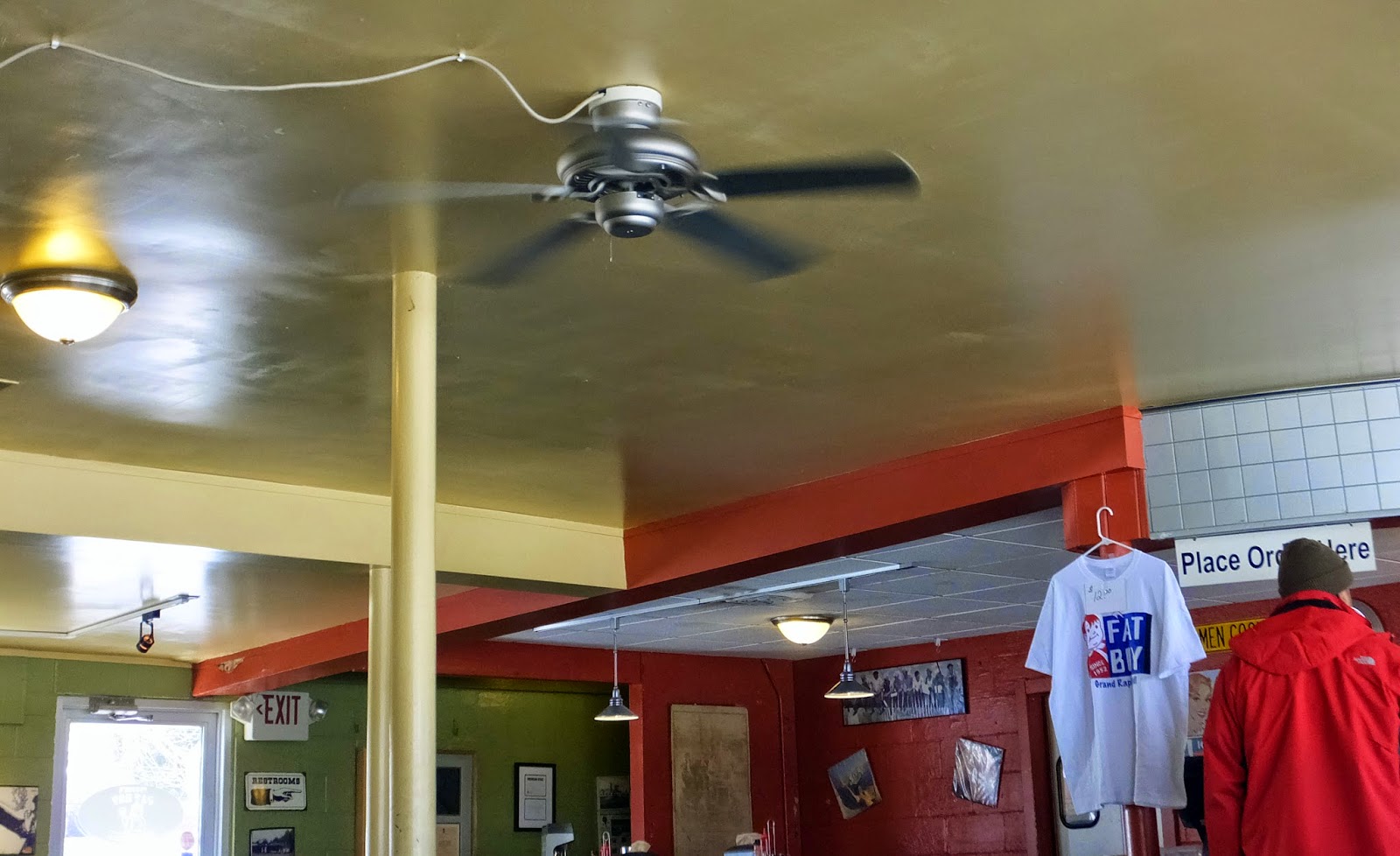 The hours have expanded to stay open some weekday evenings and apparently they've had some trouble with customers bringing their own food/beverages into the restaurant. Come on, people. 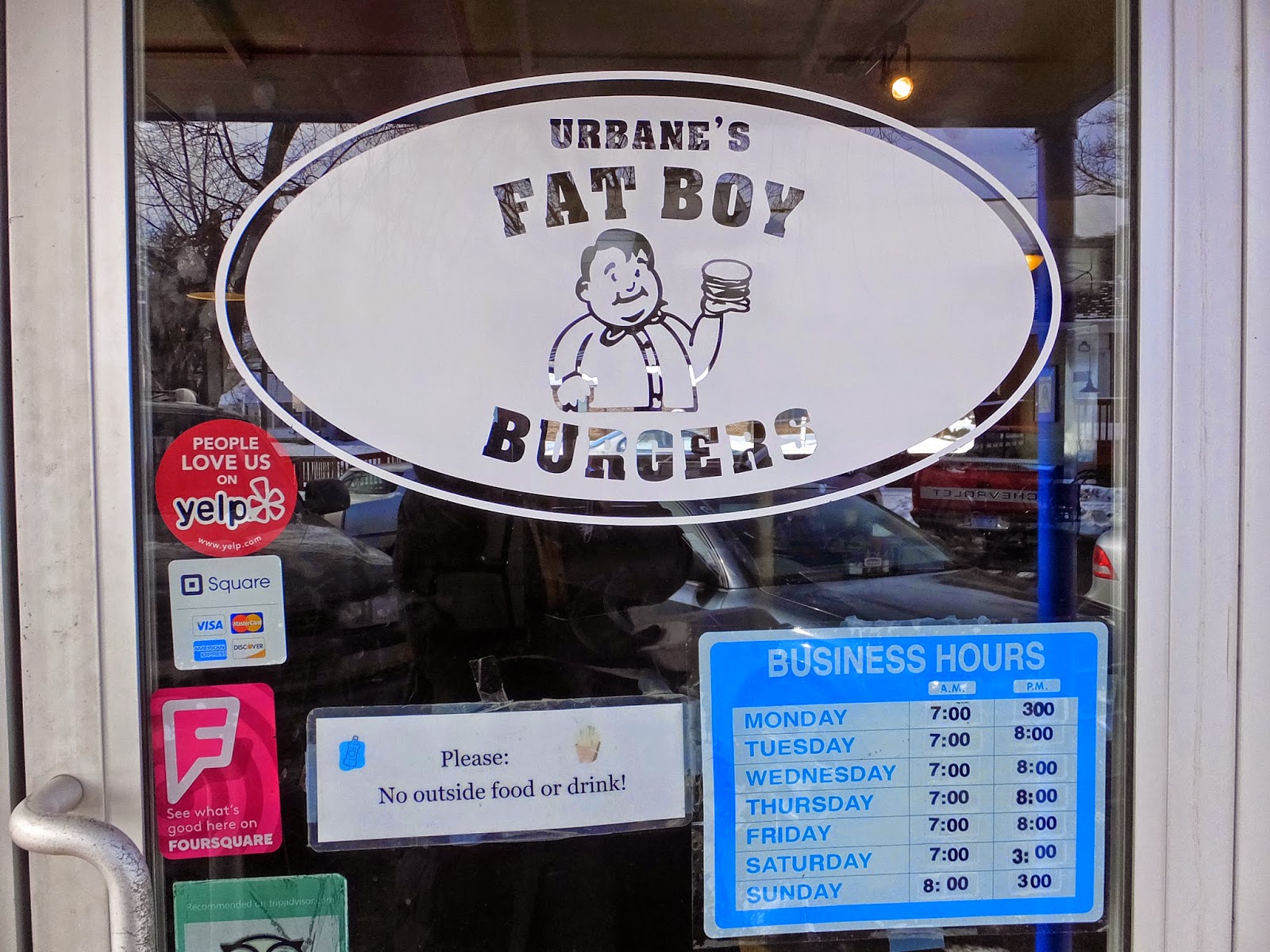 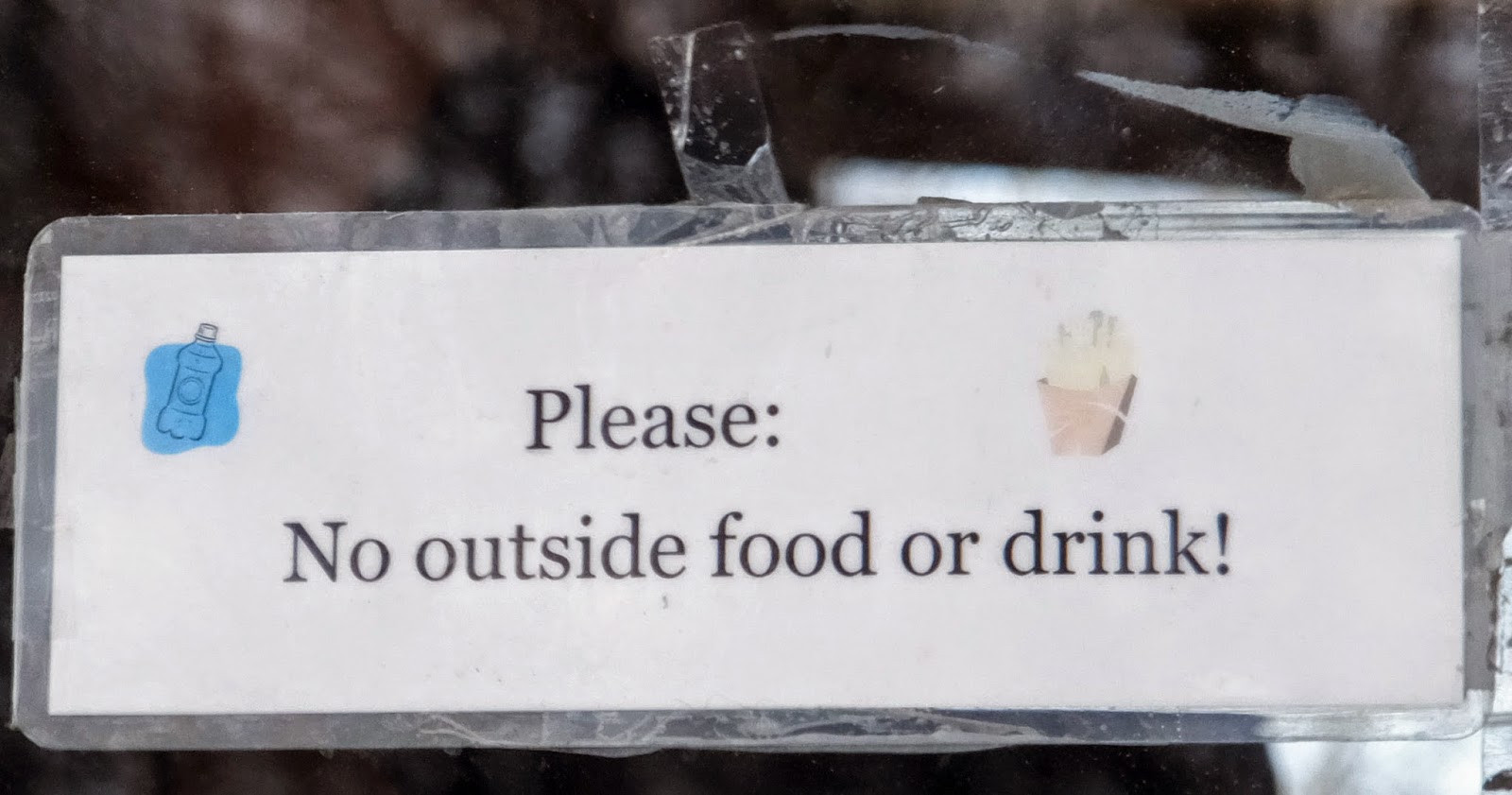 And lastly, there must still be people who think it's okay to smoke inside a restaurant? 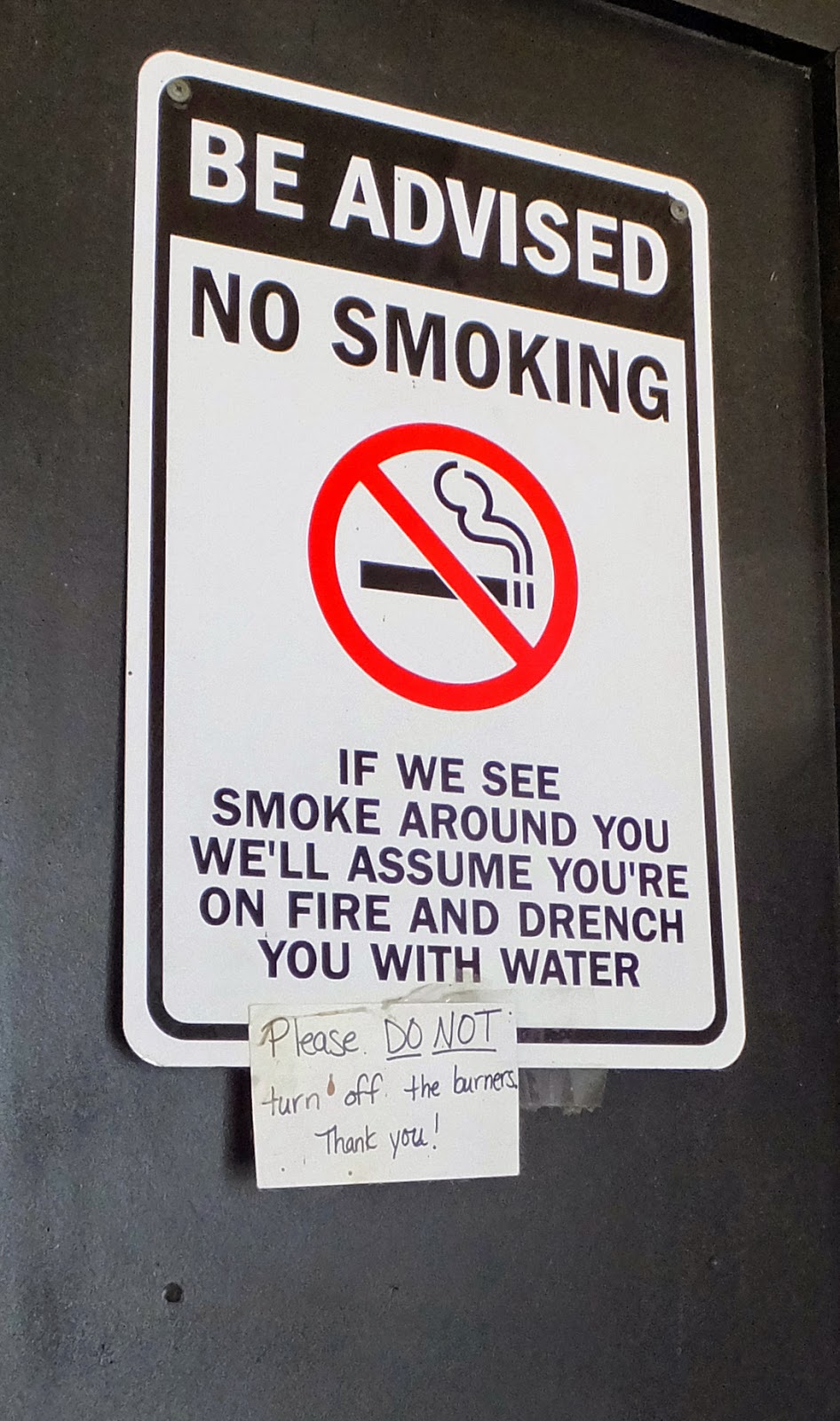 We were happy to get back here and would like to stop in for breakfast sometime. Fat Boy, around since 1952, still has the power to pull us in. 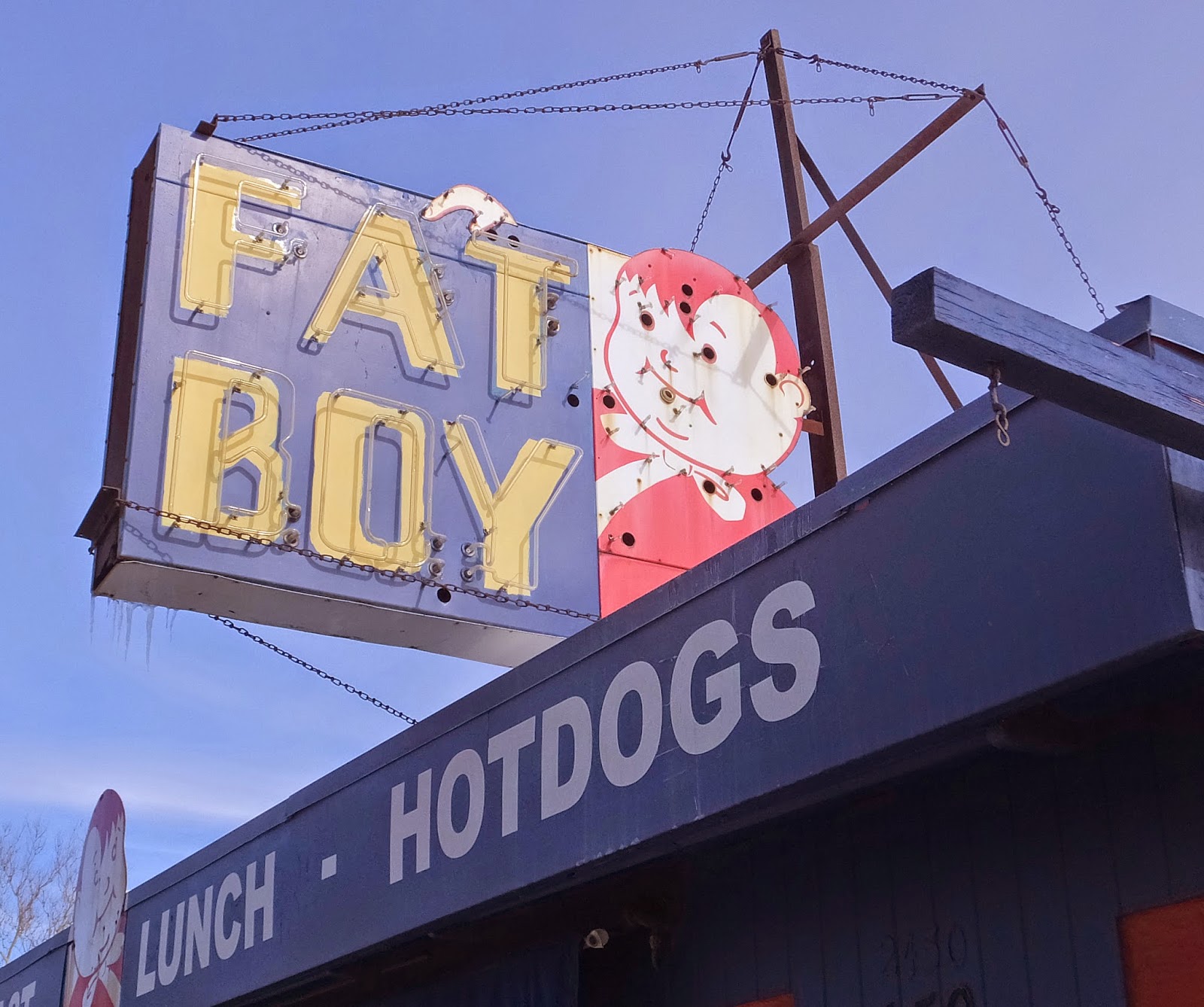 Posted by EatingOurWayThroughGrandRapids at 1:51 PM No comments: Links to this post

This was a little off the beaten path for us but we like to venture out for new tastes and came across this roomy restaurant located in a not very active retail center. Although buffets are not among our favorites, we chose the featured lunch buffet. On the whole, it was quite good.
The appetizer row, however, did not have much of interest other than the fresh shrimp; the other selections included fruit offerings and jello pieces. Other buffet oddities included a very dry beef pot-sticker, a tough deep-fried pepper chicken, a deep-fried chicken wing, and the complete absence of pork. But the chicken and beef dishes were all flavorful and the vegetables were crispy and not over-cooked. Hot & sour soup was a tad salty but good. There was plenty to eat and the majority of the dishes were quite tasty. Service was attentive and friendly. When we arrived at 12:30, there were only two other parties in the restaurant. Shortly after arriving, we had the restaurant to ourselves. Before we left, one other couple arrived. In the meantime, we saw our server, and one couple (chef/owners) who regularly checked on the buffet status. So if you would like to try an interesting Chinese buffet, check out this place before it’s no longer there.
Posted by EatingOurWayThroughGrandRapids at 4:30 PM No comments: Links to this post